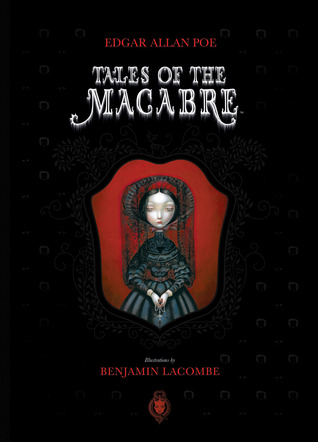 Edgar Allan Poe is the kind of author and poet who draws you in and then lets you go again, waiting for the next moment in which to ensnare you. Although I had read some of Poe's short stories, I didn't know that much about his writing style, so I'm very glad to have picked up this collection of stories.


A unique luxury edition of some of Edgar Allan Poe's famous short stories, Tales of the Macabre takes the reader into the heart of a dozen stories, including The Fall of The House of Usher, Berenice, and The Black Cat…all beautifully illustrated by Benjamin Lacombe. Includes Charles Baudelaire's essay on Poe's life and works.

Poe's stories are absolutely tragic. Each of them is infused with this idea of an old world which has passed, when aristocrats were noble, when their houses were crumbling vestiges of intellect and class and when nature was infused with a sense of gravitas. I love reading his stories because they really do transport you to a different world. However, something can also be said for the fact that many of his stories share the same protagonist and the same wife. He has his own trope, the pale, withdrawn man who is curious about life and yet suffers. I will get to the suffering in a bit. Similarly, the wife is always on the brink of death, always floating between being transitory and eternal. It's like you can see through his characters into the fabric of eternity behind them. Once you get to know them, it's a comfort to return to them rather than getting bored with them. And all of that is due to Poe's writing. He seems to be completely in control of language. Whereas sometimes language runs away with authors, not giving them the time of day or giving them too much and overloading on adjectives, Poe seems to calmly direct language where he wants it to go. He can go on a tangent mid-sentence and yet no miss a beat. It can be confusing at times, but he always leads you back. It is a good thing this collection starts with 'Berenice', because it is a prime example of his eloquence.

One of the things that mark Poe's stories is his relentless drive, it seems, to understand guilt. Poe is famous for his drinking, his biggest vice, and for his tragic family life. He lost his natural parents at the age of two and his wife died and I always felt that this, his drinking and the sense of doom that pervades his stories are related. Many of his stories, especially The Tell-Tale Heart and The Black Cat, centre around characters that seem to be tragically flawed into misunderstanding the world and their wrongdoings are punished not by others but by their very own nature that betrays them. Poe seems to have been very interested in how the human psyche explains doing wrong to itself and I don't think he ever found a satisfying answer. However, it made for fascinating stories that grip the reader in their claustrophobia and in their prose that brings mania as close as is safe. Although this doesn't always work for him, 'Ligeia' is a very confused story, his writing style usually carries him through. This was the only story I disliked.

Adding Baudelaire's essay tot he collection was a stroke of genius because reading Baudelaire's essay was an absolute delight. His writing style is completely different from Poe's, although in many ways, ironically, they are writing about the same kind of things. From his essay Poe emerges as a tragically flawed, yet beautiful hero who's lot in life it was to suffer and from which suffering he gave us, the readers, something worthwhile. Personally I also loved Baudelaire's ranting against what he perceived to be America's attitude towards its artists. It definitely made me want to read more of Baudelaire's work. 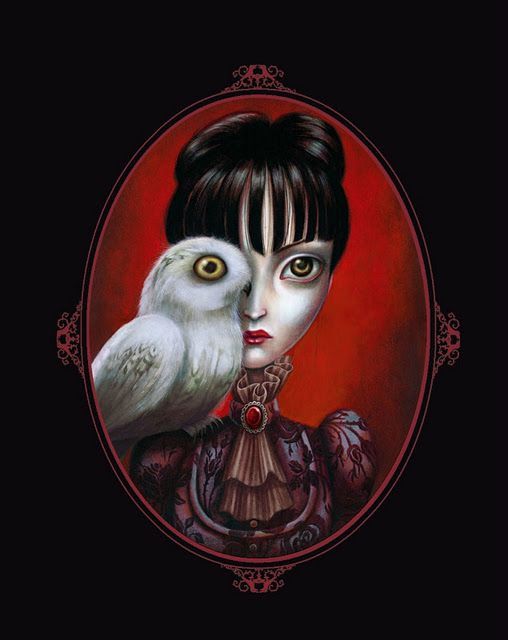 Something also needs to be said about Benjamin Lacombe fascinating artwork. For me, Tim Burton's animation always brought some Poe to mind. The darkness and yet humanity of his figures resembled Poe's stories quite closely. Lacombe paid very close attention, I feel, to Burton's style but improved on it. His drawings are absolutely beautiful and capture the essence of Poe's stories perfectly. Similarly to Poe, Lacombe worked with women a lot. They are shifting yet permanent, constantly there. His illustrations are a great addition to the stories and give the collection something different that sets it apart from many others.

I loved reading this collection. Poe was a magnificent author who had a gift and style unlike any other I have ever read. I have read other Gothic or "macabre" stories, but none reach Poe's level of clarity and humanity while being so other-worldly. Although there are some stories in which I feel Poe lost control of himself, he will always tell you a fascinating story. Benjamin Lacombe's illustrations for this collection make it a must-have, not only for Poe fans but also to fans of Gothic literature.
Posted by Juli Rahel at 7/19/2014 08:35:00 pm