Review: 'The Dervish' by Frances Kazan 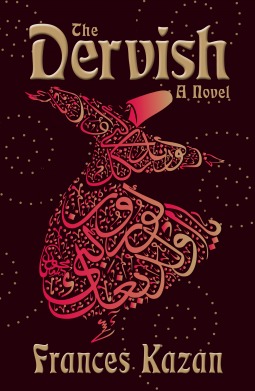 I really wanted to read this book because the history of the Middle East is incredibly fascinating and this novel seemed to be both historically accurate while not losing track of its fictional aspects. In the end I am very happy to have picked it up!


The first Arab Spring: love and revolution in the air.

The first Arab Spring: revolution and passion seethe and erupt in this action-packed romance during the dying days of the Ottoman Empire. Kazan’s novel takes us intimately behind the veil, to see and experience the Ottoman world,to let us view, from the “other” side, how the cultural and political antagonisms between the Occident and the Orient of the past century look. There are no easy villains or heroes in this story. Only ardent, unforgettable characters.

An American war widow seeks emotional asylum with her sister at the American Consulate in Constantinople during the Allied occupation in 1919. Through a cross-stitched pattern of synchronicity Kazan’s heroine becomes a vital thread in the fate of Mustafa Kemal (later Ataturk) and his battle for his country’s freedom. Based on firsthand accounts of the Turkish nationalist resistance, THE DERVISH details the extraordinary events that culminated in 1923 with the creation of the Republic of Turkey.


Despite Mary not showing a lot of revolutionary spirit, I did enjoy her character. As an artist, Mary very much takes the role of an observer. At times this means she is very passive, thereby slowing down the plot as well. However, because she observes we get amazing characterizations of such historical characters as Ataturk, Halide Edip Adivar and Annie T. Allen. It is clear that Kazan has a very deep knowledge and understanding of the years surrounding the decline of the Ottoman Empire and the birth of Turkey as an independent state. In a way similar to that of Umberto Eco in his medieval novels, Kazan allows the reader to be very comfortable in a setting they are not used to. However, where Eco consistently mixes beautiful writing with a well-paced plot and historical accuracy, Kazan doesn't always strike this balance that well. Sometimes the history part of the 'historical fiction' is pushed aside a little bit to leave room for her fiction, which leads to certain events such as the Armenian Genocide being glossed over, and unfortunately these lapses aren't always made up for with literary brilliance.

Kazan's writing style is perfect when she is describing the beauty of the Turkish landscape or the bustling of Istanbul. Here her love for the culture really comes through and these passages are some of the most compelling in the book. However, as stated before, Mary is relatively passive and gets swept up in a revolution rather than takes an active part in it. At times this is frustrating when the characters around her are such inspirational figures. However, it is also nice to have a main character who gets involved accidentally rather than sets out to serve the world. It seems a lot more realistic. But to return to Mary, her internal worries regarding her love for Mustafa and her friends at times seem very superficial when they're contrasted with the suffering of children and refugees.

Despite these points, however, is The Dervish an engrossing read that somehow doesn't let the reader go. Partially I believe this is due to the fact that the decline of the Ottoman Empire is grossly under-taught in schools across the World. The Ottoman Empire was a massive part of European history and also played a part in the First World War that cannot just be erased. At the same time, a lot of the problems not only Turkey but the rest of the Middle East are facing at the moment have their roots in the 20th century. If alone for the fact that it brings some historical figures to the foreground, this novel should be rewarded.

The Dervish didn't let me go till the very end. Up until the last page I was desperate to know more and for my taste the novel could have been a lot longer. Kazan's writing style was easy to follow and absolutely stunning at times. I would recommend this to fans of historical fiction or anyone interested in getting a feel for the history of the Ottoman Empire. It's a great starting point from where more research can be done.
Posted by Juli Rahel at 7/15/2014 07:35:00 pm