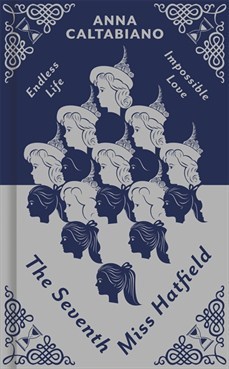 This book seemed to be everywhere I looked, constantly beckoning me with its intriguing storyline and beautiful cover. So eventually I gave in to the call and requested it on Netgalley. And I had a blast with this book. The synopsis below comes with a bit of a pre-scriptum, rather than a post-scriptum, since upon reading the novel I feel it's quite different from the synopsis, in a good way.


Rebecca, a 15-year-old American, isn't entirely happy with her life, comfortable though it is. Still, even she knows that she shouldn't talk to strangers. So when her mysterious neighbour Miss Hatfield asked her in for a chat and a drink, Rebecca wasn't entirely sure why she said yes. It was a decision that was to change everything.

For Miss Hatfield is immortal. And now, thanks to a drop of water from the Fountain of Youth, Rebecca is as well. But this gift might be more of a curse, and it comes with a price. Rebecca is beginning to lose her personality, to take on the aspects of her neighbour. She is becoming the next Miss Hatfield.

But before the process goes too far, Rebecca must travel back in time to turn-of-the-century New York and steal a painting, a picture which might provide a clue to the whereabouts of the source of immortality. A clue which must remain hidden from the world. In order to retrieve the painting, Rebecca must infiltrate a wealthy household, learn more about the head of the family, and find an opportunity to escape. Before her journey is through, she will also have - rather reluctantly - fallen in love. But how can she stay with the boy she cares for, when she must return to her own time before her time-travelling has a fatal effect on her body? And would she rather stay and die in love, or leave and live alone?

Rebecca, the seventh of that name that is, is a really interesting main character. Starting out relatively young, she matures throughout the novel.Unlike a lot of modern heroines she isn't rash or sarcastic, but very kind and funny. Caltbiano manages to strike a balance between allowing Rebecca her emotions while also maintaining her rationality. Despite the love and affection she feels for the people in her time, Rebecca knows she shouldn't be there and it creates some of the most interesting parts of the novel. Part of this is also the really good descriptions of grief that you find at places in the novel. Time-travel involves losing everyone you love and it isn't picked up enough by authors of the genre. Caltabiano describes it beautifully.

There were some amazing moments in this book in which Caltabiano addressed some really interesting issues such as class and religion. Although these moments could have been heavy on rhetoric and morality, Caltabiano makes them part of the plot and part of the characters. Rebecca's uneasiness about servants is natural when one remembers that she comes from a different time. But rather than demand change, Rebecca goes out of her way to respect not only the time she lives in but the people she lives with and it was great to see a character who is so aware and conscientious. Similarly, Caltabiano also managed to have a very religious character in her book without making her a nutjob, which I greatly thank her for. I even loved the romance. Although generally I tend to dislike the whole unrequited love/star-crossed lovers trope because, in my opinion, it often lacks originality. I think Caltabiano found a very good middle ground, both showing how grand their love is while also allowing Rebecca to be focused on her task. Henley is a great character who, just like Rebecca, is kind and caring. It is so refreshing to have a love interest who doesn't brood for a living.

The only thing I didn't like about this novel plot-wise was that the fact she was immortal and could travel in time hardly played a role for a large part of the novel. Although I've frequently stated that time-travel creates plotholes the size of Texas, I still would've liked to see more of it, especially since Caltabiano does a relatively good job at making time-travel sound reasonable. It would've been great to hear more about where she went and what she did and I would've loved to know more about the previous Miss Hatfields. But as it was the story flowed very easily, moving from one event to the next without throwing any major obstacles in the reader's way. Caltabiano's writing style is pleasant and uncomplicated. Although at times I wished there was a bit more depth to some passages, I got sucked into this novel and it is a great summer read.

The Seventh Miss Hatfield is a truly enjoyable read with some great twists and turns which I didn't see coming. The main characters and supporting cast are really interesting and a pleasure to read. I'd recommend this to people who enjoy time-travel and romance and I think there's even something for historical fiction fans in there.
Posted by Juli Rahel at 7/28/2014 10:08:00 pm