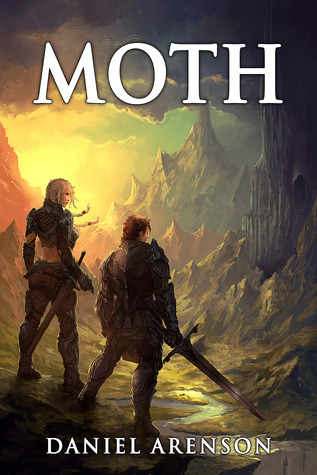 I have read a range of Daniel Arenson's books (such as Blood of Requiem and Wand of the Witch) and I have loved all of them. Which is why I was incredibly excited to read the first book of the The Moth Saga. And all of my hopes were answered, this is another good one.

That was a long time ago.

My people are the fortunate. We live in daylight, blessed in the warmth of the sun. Yet across the line, the others lurk in eternal night, afraid... and alone in the dark.

I was born in the light. I was sent into darkness. This is my story

Something you sadly don't see a lot is a book that actually tells a story from both sides. Every book has its conflict and every conflict has a "good" side and a "bad" side. However, it depends on who you ask who the bad guys and who the good guys are and authors tend to lose track of this while immersing themselves in their protagonists. Not Arenson. He chooses characters from both sides of his world and tells us their story. This means that as a reader you have quite a lot to lose, no matter which character you root for. They, both of them teens, find themselves at war and having to face some seriously hard times. More about those hard times later. I enjoyed both sides of the story almost equally, which means that as the book progressed I got more and more engrossed in how the two sides would meet. It also means I'm terribly excited for the next book, although this book's ending would have been a terrific ending for a stand-alone.

Similarly to his other books, Arenson is brilliant at world-building. Just the concept alone was mind-blowing. If the world did stop spinning and we had a side of darkness and a side of light, this sounds like a possibility. Both sides of Arenson's world have very specific cultures but then even within those there are distinctions which is another example of how realistic fantasy is as a genre. Arenson's book beautifully brings modern struggles forward and does so through his variety of characters. There are opposing religions, kings facing uprisings and children who just want their fathers back. It all makes for an incredibly engrossing read that strikes very close to the heart.

Arenson's writing is incredibly readable and I mean that in the best possible way. His writing flows, whether it's exposition, description or dialogue. Talking about description, Arenson has some of the best. Whether he's describing a world of darkness with a culture that has traces of Japan, or whether he's describing a very English life on the sun side, the descriptions are vivid enough to come to life right in front of you. This brings me to the end of the novel which is a lot darker than the beginning. Whether I would recommend this book to children depends on how resistant they are against violence. However, none of it is gratuitous, which makes all the difference. His characters are never vile for the sake of it, but because they are part of the story. As such, it is still shocking but not in an abhorrent way.

Another think to check out is Daniel's website, and in particular the page for Moth. This book is an interactive one, to a certain extent. Not only can you find maps and art work there but also music. I loved listening to the music while reading the book, so take some time to explore. Also, if you join Daniel's Mailing list you get to chose one of his books as your welcome present, the options for which includes Moth!

I loved this novel and didn't want to put this down. Arenson excels at world-building and his characters are truly a joy to read. He not only manages to spread the awesome equally across the gender but also across the border and even if it was only for that, this book is a real must read for fantasy fans.
Posted by Juli Rahel at 7/28/2014 11:31:00 pm