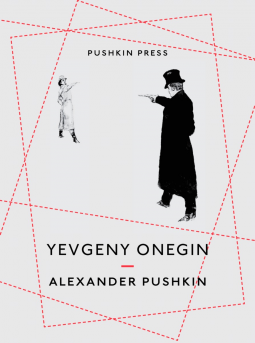 It's my father's birthday!! So what is more appropriate than sharing teasers from one of Russia's most famous works? Well, perhaps there would be more appropriate books to share but not as fun. Yevgeny Onegin and Pushkin are institutions in their own right so I'm really happy to be reading it. I'm also excited for it because I have seen a ballet based on it! And I haven't read verse in a very long time...


The aristocratic Yevgeny Onegin has come into his inheritance, leaving the glamour of St Petersburg's social life behind to take up residence at his uncle's country estate. Master of the nonchalant bow, and proof of the fact that we shine despite our lack of education, the aristocratic Onegin is the very model of a social butterfly - a fickle dandy, liked by all for his wit and easy ways. When the shy and passionate Tatyana falls in love with him, Onegin condescendingly rejects her, and instead carelessly diverts himself by flirting with her sister, Olga - with terrible consequences.

Yevgeny Onegin is one of the - if not THE - greatest works of all Russian literature, and certainly the foundational text and Pushkin the foundational writer who influence all those who came after (Tolstoy, Dostoevsky, Chekhov, etc). So it's no surprise that this verse novella has drawn so many translators. It's a challenge, too, since verse is always harder to translate than prose. (Vikram Seth, rather than translating Onegin again, updated it to the 1980s in San Franciso in his The Golden Gate).

A.D.P. Briggs is arguably the greatest living scholar of Pushkin, certainly in the UK, and as such he's spent a lifetime thinking about how to translate Pushkin. Briggs is an experienced and accomplished translator, not only for Pushkin (Pushkin's The Queen of Spades) but for Penguin Classics (War and Peace, The Resurrection) and others. Briggs has not only been thinking about Pushkin for decades, he's been working on this translation for nearly as long. It's a landmark event in the history of Onegin translations and this edition is accompanied by a thoughtful introduction and translator's note.

Tuesday Intros and Teaser Tuesday are hosted by Diane over at Bibliophile by the Sea and Jenn over at Books and a Beat.

'Not for the stately world's amusement

But as your friend, I'd have been pleased

To dedicate for your perusal

A better pledge, a worthier piece

Truer to your exalted spirit,

And holy dreams by which to fill it.' 1%

I love the beginning of this, the translation flows really beautifully. I like that Yevgeny Onegin is dedicated, or written for a friend in this way. A problem with verse, however, is that usually you don't get much of an introduction so I have no idea what is going to happen.


'And local folk were much enthralled,

Which then gave rise to lots of guesses,

And enigmatic noes and yesses,

And jokes and judgements, some quite rude:


I think we can all recognise ourselves in the situation that Tatyana finds herself in. The guessing and the prodding that starts when someone is maybe being flirted with. It's both the most awkward and exciting thing. But considering the blurb I feel like this guessing game may have some bad consequences.