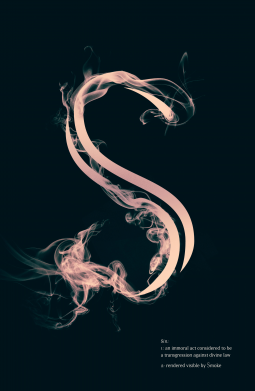 Sometimes the mere idea of a book is enough to be intriguing, a concept that is the perfect mix between what you've been waiting for and what you'd never have expected. That is how I felt when I read the blurb for Smoke by Dan Vyleta. Here was something interesting, something different, that had the feel of a contemporary classic about it. The fact that the cover is intriguingly stunning in all its editions also helps. And I am incredibly pleased to say that Vyleta didn't fail me. Thanks to Netgalley and Orion Publishing Group for providing me with a copy of this book in exchange for an honest review.

'The laws of Smoke are complex. Not every lie will trigger it. A fleeting thought of evil may pass unseen. Next thing you know its smell is in your nose. There is no more hateful smell in the world than the smell of Smoke . . .'

If sin were visible and you could see people's anger, their lust and cravings, what would the world be like?

Smoke opens in a private boarding school near Oxford, but history has not followed the path known to us. In this other past, sin appears as smoke on the body and soot on the clothes. Children are born carrying the seeds of evil within them. The ruling elite have learned to control their desires and contain their sin. They are spotless.

It is within the closeted world of this school that the sons of the wealthy and well-connected are trained as future leaders. Among their number are two boys, Thomas and Charlie. On a trip to London, a forbidden city shrouded in smoke and darkness, the boys will witness an event that will make them question everything they have been told about the past. For there is more to the world of smoke, soot and ash than meets the eye and there are those who will stop at nothing to protect it . . .

I have a habit of racing through books, picking them up and not putting them down until they're done. On the one hand this ravishing of books is brilliant because you get a great story and all its excitement in one quick fix. But on the other hand it means the pleasure of each book also dissipates very quickly, leaving you looking for the next read and almost forgetting about the last. In the case of Smoke I decided to take my time, savour it, so to say. At almost 450 pages, Smoke isn't a short book, but there is also a quality to the experiences it describes which are better taken one gulp at a time. Vyleta's concept of visible sin, of Smoke and Soot showing our innermost thoughts, revealing passion, anger, hate, fear and more is fascinating, both to read about and think about. As Thomas, Charlie and Livia make their way through the book their struggles with revealing these emotions is very interestingly described and developed. Initially it might not be such a bad idea, to know whenever you're sinning because that way you can change. But as Smoke rolls on Vyleta introduces more and more complications, forcing the reader to not only think about the positions his characters are in but also about their own perceptions of sin and morality, what makes something wrong and when one can "sin" with a clear conscious.
For me the novel's strength lies in its trio of main characters. Raised in the upper class of a society that is built on vilifying those who Smoke, who see it almost as a degenerative trait, Thomas, Charlie and Livia all struggle with coming into their own in different ways. At the same time they are also thrown into the intrigues of a bigger world, where more is at stake than staining your pillow and getting detention. Many YA novels focus on the difficulty for teenagers to find a balance between following their instincts and desires while also developing into a mature and function member of society. The struggles between feeling and knowing, passion and reason, sin and morality, are at the heart of a lot of books. Visualising it and showing the consequences of going too far into either direction is one of the things that makes Smoke stand out. It also allows Vyleta to honestly describe both the vile and beautiful sides of human passion. Some despicable things happen in this novel, terrifyingly recognisable from the world we live in. But there is also the beautiful awakening of emotions which uplifts parts of the novel. I wouldn't consider this a spoiler but the tension between Thomas, Charlie and Livia is also worked out really interestingly, providing an interesting twist on what we usually see in novels.

What made me think very highly of Smoke almost from the start was Vyleta's willingness to use his novel to comment upon our contemporary society and politics. The divide between the classes, the moral judgement that empowers this divide and allows a certain group of people the shamelessly take advantage, the backroom deals , the relative ineffectiveness of government,it all finds a place in this novel. But perhaps nothing comes out of this novel as clearly as England's danger to close itself against the world, especially after the results of the 23rd of June. In Vyleta's Smoke England practically finds itself in a Golden Isolationism, the fear of visible sin closing borders, hearts and minds, and stifling a country in its development. One of literature's tasks, of all art, in my opinion, is to comment upon the society within which it is created but too many contemporary novels seem to take place in a social vacuum, a time period that is almost impossible to identify because it discusses and deals with none of our current social anxieties and troubles. I do hope to see more novels like Smoke in the next years, which, perhaps unconsciously, pick up up social trends and translate them into their stories.

Vyleta's writing is stunning. It is difficult to write about emotions in a way that doesn't come across as incredibly over the top or too restrained. Vyleta finds a good balance where he takes his characters' emotions seriously but doesn't let them overwhelm the narrative. Where Vyleta does use tropes he does so interestingly, which is a major boon to people like me who get annoyed at reading the same thing over and over again. The descriptions, aside from the emotions, are great. Whether it is describing the almost stifling atmosphere of the boys' boarding school or the sheer presence of London, full of sin, full of people, Vyleta creates the environment vividly for the reader. The first half of the novel does a lot of world-building, setting up characters and introducing storylines and, as such passes quite quickly. It has a good pace and sucks the reader in immediately. The second half of Smoke is where most of the struggle takes part, where the characters do most of their growing, and as such the pace is a bit slower. For me the two parts complemented each other very well, to the point where it feels like the novel is growing with you. Vyleta also switches between his narrators frequently which gives the reader a lot of different angles to approach the narrative from. Personally I enjoy this, especially if the author successfully manages to differentiate between the different characters in his writing.

I absolutely loved Smoke. From the initial premise to Vyleta's writing, this novel is a joy to read. It's exciting and conscious, interestingly told and engaging. I will not only be frequently rereading this novel, I will also be telling a lot of people about it. I'd recommend this to fans of Literary Fiction and Sci-Fi/Fantasy, as well as Historical Fiction fans.
Posted by Juli Rahel at 7/13/2016 04:55:00 pm