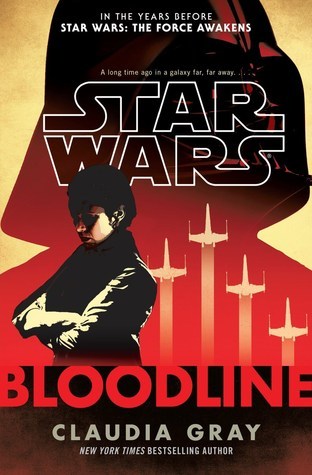 I have just spent a whole three days at Star Wars Celebration Europe in London, immersing myself in all the Star Wars I could possibly desire but on the train there and back and in the queues I was reading Bloodline. From the moment it was announced this novel has intrigued me, since the political themes of the Prequel-trilogy are what keeps me fascinated. Thanks to Penguin Random House for sending me a copy of this book in exchange for an honest review, and for being absolutely lovely at SWCE!


When the Rebellion defeated the Empire in the skies above Endor, Leia Organa believed it was the beginning to a lasting peace. But after decades of vicious infighting and partisan gridlock in the New Republic Senate, that hope seems like a distant memory.

Now a respected senator, Leia must grapple with the dangers that threaten to cripple the fledgling democracy—from both within and without. Underworld kingpins, treacherous politicians, and Imperial loyalists are sowing chaos in the galaxy. Desperate to take action, senators are calling for the election of a First Senator. It is their hope that this influential post will bring strong leadership to a divided galaxy.

As the daughter of Darth Vader, Leia faces with distrust the prospect of any one person holding such a powerful position—even when supporters suggest Leia herself for the job. But a new enemy may make this path Leia’s only option. For at the edges of the galaxy, a mysterious threat is growing. . . .

Lucasfilm caused much consternation a while back when it was announced that the Star Wars Extended Universe, holding dozens of stories ranging hundreds of years of Star Wars history, would be scrapped in order to create a cohesive canon of stories that would support the main narrative of the seven films. Lucasfilm created the Story Group which oversees that a continuous and logical story is told in each medium, that the games support the films, that the novels inform on characters and developments, etc. Gray's Bloodline is set roughly between the Original trilogy and the new The Force Awakens, in many ways tasked with providing more information about crucial plot elements in the latter film. However, at the heart of this novel is the character development of Leia Organa, the Princess who became a General. Whereas The Force Awakens didn't give Leia very much to do, Bloodline has Leia become very active, having to respond to the potential crumbling of the political system. The struggle between being 'the daughter of ...' and being her own person is also really interesting and is exactly what has been missing from Leia's story so far. The Original Trilogy focused on Luke and his relationship with Vader which was, in many ways, much shorter and sweeter than Leia's. Bloodline will give a lot of people the answers to questions they've been asking for a while and will give them the Leia they know, active, provocative and above all beautifully independent.

As I said above, I am really interested in the political elements of Star Wars. It is one of the ways in which Star Wars has continued to comment on contemporary social anxieties and thereby continues to be relevant and informative. In the Prequels we see the break down of a Republic, see a democratic institution become corrupted and be replaced by a dictator. In the Originals we see this dictator rule the Empire, which is destroyed by the Rebellion. In many ways we saw reflected in this both the Cold War anxieties about fascist conformity as well as the 21st century's conflict about centralisation and political power in and of itself. In Bloodline are explored two political opposites which are currently incredibly relevant to Europe's situation. On the one hand we find the Centrists, who believe in a centralised government for the whole Galaxy, preferably with a single ruler. On the other hand there are the Populists who believe there should be no overall control because it too often leads to tyranny. With her experience fighting against the Empire, Leia is solidly Populist but Gray shows her willingness to open up to new ideas. Star Wars has always been about political and it is great to see new authors continue to use Star Wars to make politics interesting to new readers and fans, to translate our own world into this fictional one and thereby elucidate it. Relevance to contemporary society is what makes a book special, in my mind. As such, Bloodline is not only an important novel to the Star Wars Galaxy but also to our own world.

Writing a tie-in can be quite difficult. A character as well-known and beloved as Leia, who has a recognisable voice, is a challenge to any author. Thankfully Claudia Gray is not only a great writer, but she also has experience writing Star Wars. Her Lost Stars from last year proved her capability to write within this universe, and with Bloodline she cements her status as one of the best of the current tie-in writers. Moving fluidly between description and dialogue, fighting and discussion, reflection and action, Gray never loses the plot. Gray nails characters like Leia and Han, which the reader knows, and introduces fascinating new characters which I'd love to see again. Moving between different narrators, with most of the focus lying on Leia, Gray doesn't let her readers off easily, placing the blame solidly on one side. Rather, Gray shows the ambiguous morality of a world which seems on the brink.

I really loved Bloodline. It not only captures the Leia we know very well, it also introduces us to aspects of her we didn't yet know. Gray makes this story her own and fills in crucial gaps in the Star Wars canon. Whether you're a dedicated Star Wars fan or only loosely interested in Sci-Fi, I'd recommend Bloodline as an example of the perfect tie-in novel.
Posted by Juli Rahel at 7/18/2016 11:45:00 am