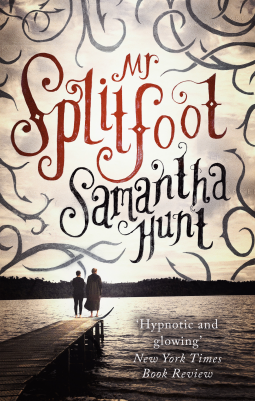 Sometimes a book keeps you up all night reading because it's simply that interesting! Mr. Splitfoot was one of those books for me. The cover was the first thing that attracted me to the book but then the blurb absolutely sealed the deal. However, by the time I got around to reading this book I had forgotten almost everything from the blurb and reading the book was a true journey of discovery.

Nat and Ruth are young orphans, living in a crowded foster home run by an eccentric religious fanatic. When a traveling con-man comes knocking, they see their chance to escape and join him on the road, proclaiming they can channel the dead - for a price, of course

Decades later, in a different time and place, Cora is too clever for her office job, too scared of her abysmal lover to cope with her unplanned pregnancy, and she too is looking for a way out. So when her mute Aunt Ruth pays her an unexpected visit, apparently on a mysterious mission, she decides to join her.

Together the two women set out on foot, on a strange and unforgettable odyssey across the state of New York. Where is Ruth taking them? Where has she been? And who - or what - has she hidden in the woods at the end of the road?

Ingenious, infectious, subversive and strange, Mr Splitfoot will take you on a journey you will not regret - and will never forget.

Mr. Splitfoot is a book on fire. I'm not quite sure how else to describe it, still at a loss for words. First, one thing: I'm not quite sure why, but there seems to be a bit of a trend arising at the moment to write about cults and communes this summer. Although it is only a relatively small part of Mr. Splitfoot that focuses on a cult, it is one of the parts that leaves a major impression on the reader. Partly this makes such an impact because the novel is focuses on that strange mix between history, the fantastical, the gothic and the "real", whatever that may be. This brilliant clash between different genres, different feelings and different interests is what makes Mr. Spitfoot quite incendiary at times. On the one hand its characters, especially Cora, feels incredibly modern and yet their stories also have a timeless feel to it.

One of the elements of Mr. Splitfoot which is very intriguing is Hunt's attention to the relationship between mothers and daughters. The relationship between mothers and children always receives a lot of attention, how nurturing and natural and adorable and sweet it is. And yet mothers are also something horrid in popular culture: the 'hockey moms', the Psycho moms, the absent and murderous moms. And there is an antagonism between mothers and daughters which is fascinating. Mothers see themselves reflected in daughters, all their hope still ahead of them and so much danger, while daughters see their future reflected in their mothers, settled and stuck. It leads to a very tense relationship defined by an intense love and an intense antagonism. There is a beautiful quote in Mr. Splitfoot about this relationship which I simply have to share:


'There's sacrifice, antagonism, rebellion, obsession, and adoration, but no properly complex word for what's between a mother and a daughter, roots so twisted, a relationship so deep, people suffocated it in kitsch and comfort words to pretend it's easy.' 29%

It's an intriguing thing and Mr. Splitfoot is special in that it gives the reader different representations of mothers and daughters, rather than having Hunt force her idea of motherhood onto the reader.

Mr. Splitfoot might take some time to get in to for some readers. Hunt doesn't give a lot away at the beginning of the novel, keeping her readers in the dark but interestingly so. Two different stories, related and yet not so until the very end of the novel, flow alongside each other, both headed by two fascinating female characters. Ruth's story, and Nat's by extension, feels almost supernatural, bringing gothic and magical realist elements into "normal" fiction. Channelling the dead and escaping the foster system, it is utterly fascinating. Cora's story is a modern one, a woman lost in her own life, preferring her computer over her lover, and pregnant. Running, or rather walking, away from her life seems the easiest thing and she makes for a great protagonist.

Hunt does as she pleases in Mr. Splitfoot, moving between different time period, different narrators and between different writing styles. Her writing absolutely and utterly uplifts this novel. It's hard to put into words where the magic lies. There are descriptions of life in this novel which feel incredibly true, conversations which need to be had and truths which we feel should be kept secret. Part of the fascination lies in Hunt's willingness to break with what the reader expects, letting a sentence go awry or simply stop before one expects, stopping a chapter just before a twist and then letting it pass, letting the magical flow into the real and blurring the distinction. A character in the novel talks about the 'tyranny of fiction' and Mr. Splitfoot is one of the best examples of recent novels that shakes off this tyranny. It's the best of American Gothic, the perfect genre to shake you out of the comfort that everyday brings, to bring the uncanny a little bit too close for comfort and to bring some beauty to the quotidian life.

I recommend Mr. Splitfoot to everyone! It's a beautiful mix of genres and Hunt has written some fascinating moments and characters. This novel definitely will not let you go for a long time. I recommend it to fans of Magical Realism and, yes, Psychological thrillers.
Posted by Juli Rahel at 7/08/2016 12:31:00 am