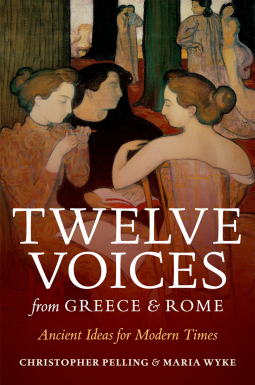 I find it fascinating how certain "authors" from the past have remained with us, somehow never becoming irrelevant and always finding an audience. No matter how they have been passed down to us, through their own writing or the words of others, there are some names which have remained with us for centuries. So when I saw Twelve Voices I snapped it up immediately. Thanks to Netgalley and Oxford University Press for providing me with a copy of this book in exchange for an honest review.


Twelve Voices from Greece and Rome is a book for all readers who want to know more about the literature that underpins Western civilization. Chistopher Pelling and Maria Wyke provide a vibrant and distinctive introduction to twelve of the greatest authors from ancient Greece and Rome, writers whose voices still resonate strongly across the centuries: Homer, Sappho, Herodotus, Euripides, Thucydides, Plato, Caesar, Cicero, Virgil, Horace, Juvenal and Tacitus.

To what vital ideas do these authors give voice? And why are we so often drawn to what they say even in modern times? Twelve Voices investigates these tantalizing questions, showing how these great figures from classical antiquity still address some of our most fundamental concerns in the world today (of war and courage, dictatorship and democracy, empire, immigration, city life, art, madness, irrationality, and religious commitment), and express some of our most personal sentiments (about family and friendship, desire and separation, grief and happiness).

These twelve classical voices can sound both compellingly familiar and startlingly alien to the twenty-first century reader. Yet they remain suggestive and inspiring, despite being rooted in their own times and places, and have profoundly affected the lives of those prepared to listen to them right up to the present day.

Much of Western civilization does seem built upon Ancient Greece and the Roman Empire. I say 'seem' because when we think of these two we usually have both very distinct and vague image in our heads. The Greeks wore togas and the Romans were gladiators, right?  I studied Greek and Latin in high school and am currently studying as a Medievalist, so my view of both Greece and Rome continuously changes. I have come to the conclusion that since we'll never know exactly what these places and eras were like, it is more fruitful to look at what relevance they still have to us. As such, Twelve Voices from Greece and Rome is incredibly topical and useful. The list of voices up for discussion is in many ways a Who's Who of philosophy and history. Even if you've never read anything by them or about them, you will probably have heard of Homer, Plato, Caesar or Virgil. And yet there are also definitely voices amongst these twelve which aren't as widely known, such as Sappho, Thucydides and Juvenal. By bringing these together Pelling and Wyke are able to show the links between them, the things they share and how they come together to remain relevant.

My favourite chapter from Twelve Voices from Greece and Rome is probably the chapter focusing on Sappho since she is too often used as a joke or completely forgotten. Born on the Greek island Lesbos between 630 and 612 BCE, Sappho wrote intensely personal and emotive poetry. Although most of her work has been lost, that which remains has made her one of the most important Greek poets to have survived. The topic of her poems was often her love for a woman, which inspired the modern denominator lesbian from Lesbos. What I have always found inspiring about Sappho was that she described her own pleasure in her own words and that in her poems the female body owned pleasure as well, rather than just had it projected onto it. I was very glad to see Sappho included in Twelve Voices from Greece and Rome and especially the attention which Pelling and Wyke paid to both her writing and her life.

One of my gripes with Twelve Voices from Greece and Rome is completely my own fault. Engaging, as mentioned above, quite a lot with these ancient ideas on a weekly basis, I tend to look for something new when reading about the likes of omer and Cicero. But, as the blurb says, this book's aim is to be 'a book for all readers', which means that there is no intense investigation or analysis of the texts and authors chosen. Rather Pelling and Wyke's writing is much more qualitative and intuitive, investigating why it is the Iliad felt relevant for soldiers during the First World War, or what Virgil's Aeineid still tells us about the human condition. As such, Twelve Voices from Greece and Rome is the perfect introduction for those who only know these twelve authors by name. For anyone looking for more, however, the book's appendix of suggested Translations and Further Reading is very helpful.

Pelling and Wyke both focus in on small details, words, phrases, lines, to show the direct emotional effect of the writing, as well as addressing such massive works as Caesar's Commentarii de Bello Gallico as a whole. On the one hand this approach means that readers completely new to Classic authors get a great introduction to various aspects of these authors' works. However, at times the chapters also feel a little bit unfocused because of that. At the end of each chapter you know that you're interested and want to know more, but there's also no specific message to take away. What makes up for this is how incredibly up to date the book is, including some of Sappho's most recently discovered poems, etc.

Twelve Voices from Greece and Rome was a really interesting and fun read. Pelling and Wyke are engaging writers who bring in their own experiences to show the reader that just because these voices are centuries old they aren't outdated. I'd recommend this to those with an initial interest in the Classics or those wanting to refresh their knowledge.
Posted by Juli Rahel at 7/02/2016 12:37:00 am