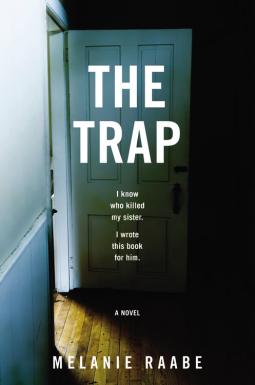 Too often psychological thrillers fall into the trap (see what I did there?!) of being too predictable. As a genre it should thrive of new and different ideas and set-ups, "villains" that we haven't seen before and "victims" we're surprised by. A great example is the recent film Hush which really brought something different to the thriller genre and how its stories conventionally go. Lately I have been trying to keep my eyes out for literary thrillers to bring a same kind of surprise and The Trap immediately caught my eye. Thanks to Netgalley and Grand Central Publishing for providing me with a copy of this book in exchange for an honest review.


In this twisted debut thriller, a reclusive author sets the perfect trap for her sister's murderer--but is he really the killer?

For 11 years, the bestselling author Linda Conrads has mystified fans by never setting foot outside her home. Haunted by the unsolved murder of her younger sister--who she discovered in a pool of blood--and the face of the man she saw fleeing the scene, Linda's hermit existence helps her cope with debilitating anxiety. But the sanctity of her oasis is shattered when she sees her sister's murderer on television. Hobbled by years of isolation, Linda resolves to use the plot of her next novel to lay an irresistible trap for the man. As the plan is set in motion and the past comes rushing back, Linda's memories--and her very sanity--are called into question. Is this man a heartless killer or merely a helpless victim?

The unreliable narrator is nothing new. If anything, it has become increasingly popular in the last decade or so both in film and in literature. Books such as We Need to Talk About Kevin and films such as The Others love to play with the audience's perception of the main character and the truth of the story they're telling us. It's also an effect of the creeping and constant influence of psychoanalysis in pop culture which shows itself in our fascination with human darkness, with the power of our unconscious. Raabe's The Trap does the unreliable narrator amazingly. At times you genuinely wonder whether we  can trust Linda, if Linda can even trust Linda and what the other characters are thinking. Is anything what it seems and if it is, what does it mean? Raabe doesn't keep this tension going throughout the novel, otherwise reading it would be too tense an experience, but there are many moments in which the whole novel seems to undergo a shift as the reader has to readjust their opinion on the characters and happenings of the novel. It makes for great and intriguing reading.

A large part of The Trap focuses on the relationships between sisters, the natural and unnatural tensions, the ever-present love but also the ongoing annoyances. Raabe herself said she was interested in these complex relationships and the complexity does come across in the novel. How it is affected by time, and what role feelings of guilt and shame play in twisting this relationships and others is almost more interesting however. Thanks to the device of the unreliable narrator the reader gets to make up their own mind regarding both Linda and her sister, which doesn't have to be positive. These varying tensions also allow Raabe to introduce a lot of twists and turns into her story, keeping the reader guessing throughout. Part of the twists are also introduced because the main character is an author. There is a lot of attention to storytelling and Raabe keeps on setting up story elements to discuss storytelling itself. Because Raabe's writing about Linda and her psyche is so interesting, it makes the parts of the story focusing on the resolving of the crime almost less interesting.

Raabe has quite the job in The Trap. Her main character is in a very unusual situation, one which not many readers will recognize or be able to immediately identify with. She has to create a whole world and a complex character within a single house, with hardly any interactions. It's not always easy to spend a lot of time inside a single character's head, but Raabe pulls it off. She also split the narrative of her novel between the story of Linda setting the trap and Linda's novel, Bloodsisters, which she uses as part of the trap. Being able to switch between different styles of writing and illuminate the core story of what happened to Linda's sister from different sides really allows Raabe to broaden her story. Imogen Taylor's translation from Raabe's original German is also amazingly done. Whether it's Linda's disrupted mental state or the more action-centred aspects, Taylor brings it all across.

I really enjoyed The Trap and raced through it. Raabe definitely knows how to spur her readers along and there is amazing writing in this novel. There is something truly different about the set-up of this novel and I look forward to reading more of Raabe's writing. I'd recommend The Trap to fans of Psychological Thrillers.
Posted by Juli Rahel at 7/27/2016 07:02:00 pm