Review: 'Asking For It' by Louise O'Neill 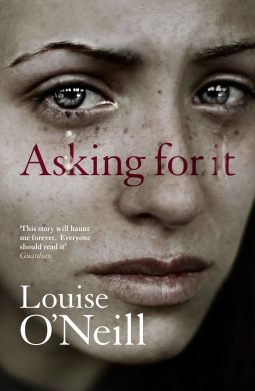 Some novels you start with the knowledge that this one might just punch you in the gut and leave you wheezing for a while. I had that suspicion of O'Neill's Only Ever Yours two years ago and it proved completely correct. I still frequently think of it and it's at the top of my 'to reread' list. So when it came to Asking For It my suspicion was a knowing trepidation, which was completely affirmed. Before getting into my review I want to give a trigger warning. It might not be necessary but I will be discussing rape in this review and I don't want to accidentally upset anyone. Thanks to Quercus Books and Netgalley for providing me with a copy of this book in exchange for an honest review.

‘She writes with a scalpel.' Jeanette Winterson

Does it matter if you can't remember? A novel about betrayal and consent, truth and denial, in the age of the smartphone it is a must-read for all teenagers

It's the beginning of the summer in a small town in Ireland. Emma O'Donovan is eighteen years old, beautiful, happy, confident.

One night, there's a party. Everyone is there. All eyes are on Emma.

The next morning, she wakes on the front porch of her house.

She can't remember what happened, she doesn't know how she got there.

She doesn't know why she's in pain.

But everyone else does. Photographs taken at the party show, in explicit detail, what happened to Emma that night.

But sometimes people don't want to believe what is right in front of them, especially when the truth concerns the town's heroes . . .

Novels such as Asking For It are so incredibly important. To some it may seem as if our current culture is already filled to the brim with conversations about consent, drinking, rape and drugs, and that surely it wouldn't hurt to just calm down a little bit. But most of those television specials or well-meant social media hashtags can't be quite as effective as a book as brutal as Asking For It. If you're hoping that O'Neill will spare you in this book, that it will hold only encouragement but will keep the worst of the darkness far away then you're mistaking. This book won't tell you that as long as you have mace in your bag and a friend on the phone you will be fine walking through the dark park. Because it is not the dark park you have to fear.

Three out of four rapes are committed by someone known to the victim, a statistic which is so simple and is yet one which is too often brushed under the carpet. The graphic on the right comes from RAINN and it's horrifying. Young girls are taught to fear strangers behind bushes, when those aren't the only situations in which their eyes should be wide open. Alongside this, a Rape Crisis survey found that out of a 1000 women interviewed a third thought a woman couldn't be raped if she didn't fight back, while 60% thought it could only be only rape if the woman said 'no'. What these statistics show is how incredibly complex the conversation around rape and consent is, how many different factors play a role in people making their decisions on either, but also how much judgement people feel entitled to. For many people it remains a clinical debate, one from which they can distance themselves because 'it would never happen to them', and statistics such as this make no difference in that. But novels such as Asking For It can perhaps aid in making people understand the horror of the situation their discussing. O'Neill addresses the dark, the white, and the gray spaces with a baffling honesty which is at times almost overwhelming. But Asking For It is supposed to shock you, because rape should never be something we accept as a commonplace in our society.

Similarly as to how she did in Always Yours, O'Neill does not hold the reader's hand in Asking For It, sugarcoating the darkness and giving us or Emma a happy shining ever after at the end. Jeanette Winterson is absolutely correct when she says that O'Neill writes with a scalpel because her books cut. With an almost analytical gaze she takes apart the different layers of deception we throw over our lives; the affected laugh, the secret midnight studying, the guilty snacks, the unconscious demands and laws of social interaction which are perhaps at their strongest in high school, the intense difference in gender expectations. And when these are all stripped back, when O'Neill shows us her characters completely bare, and through them shows us ourselves, we find people who are absolutely terrified of doing the wrong thing at the wrong time, who abuse each other for what they think of as the greater good, people whose idea of self is completely controlled by outside forces. As humans we don't necessarily come out of Asking For It very well. Each person has a little silver lining, that bit of compassion or love which seems to lift them above the rest but that silver lining always comes with a cloud of darkness.

The cast of characters created in Asking For It is immediately recognizable. Everyone who can recall their high school years will remember that clique of pretty girls, that group of jocks, those parties where underage drinking was no big deal, and all those fluid boundaries which left room for too much too soon. O'Neill's stroke of genius is most apparent in Emma. It would have been so easy to make Emma the innocent and sweet teenager who has never done a wrong thing in her life, the perfect girl who the reader can't help but love. But that girl would have been a complete invention and it would have stripped Asking For It of all its power. As she is, Emma is quite terrible at times. She snipes, she demands, she mistreats and above all, she is desperate for recognition. Perhaps it is her desperation to be seen, to be acknowledged and appreciated which is at once the most off-putting and the most recognizable thing about her. Teenage girls are constantly torn between being 'good' and 'bad', forced to walk the thin line between being desirable but not available, wanted but not had. Although much of this can be avoided by taking a step back from the crowd, this comes with the beautiful realization of one's irrelevance, which is quite a bitter pill to swallow at thirteen. Emma's need for affirmation comes from this tearing and it is something every girl will recognize. What happens to her thereby also becomes something every girl will have to face the chance of, and that is where the fear lies. How she describes the way in which Emma's town responds, how the national and international media respond, again strikes that balance between disgusting and recognizable. The blame and burden, which so clearly should not fall on the victim, is happily placed there by those who should know better. That in and of itself is a necessary realization.

It is necessary to be completely honest when it comes to novels such as this, themes such as this, because in the verbal shadows and "Blurred Lines" is where the danger lies. As an outspoken feminist I am incredibly exited that books such as Asking for It are not only being written but also being received so well, with readers avidly picking up O'Neill's themes and starting discussions about it. After reading Only Ever Yours I lent it to friends and my little sister, each of which took something away from the novel, and it will be the same with Asking For It. But here comes to part where I have to be almost shamefully honest. I'm a feminist and very outspoken about the need for conversation on topics such as rape, but there was a part of me which, at times, didn't want to keep reading. It's so easy to look away, to just close the book and keep the conversation hypothetical. To log in on Facebook and talk about the need for stricter follow up on rape accusations while ignoring how something like Facebook is used against women and girls every day. Asking For It is set in our world, in our now, and it makes it impossible to not face the fact that so is rape. O'Neill doesn't spare the reader and after reading this book I was shaken to the core. Not because I had 'never really thought about it', but because she brings it so close and as such also brings the realization that I've been so lucky so far. As said above, the way the conversation is now we are able to distance ourselves from all sorts of crimes that happen in our countries. Rape, war, murder, these all happen somewhere else. O'Neill reveals that it happens at home and that you play a part in it.

Asking For It isn't fun. It's not a summer read which you can pick up and put down easily. It is an important novel though, one which can significantly contribute to people's awareness of rape and its consequences. Perhaps it will be too graphic for some, too brutal, but in my opinion this is exactly how we should write about rape. I won't have to tell fans of Only Ever Yours to read it, but to anyone who wants to confront themselves with the horror faced by so many women (and men), this is a must read.

I'd like to leave you with the links to both Rape Crisis England and Wales and RAINN. Do search them out if you need help or want information: