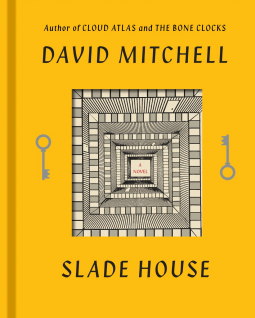 David Mitchell is the kind of author many seem to be aware off and yet many have not read. When the film adaptation of Cloud Atlas came out many of my friends convinced themselves to try the book, only to despair at its length and intricacy. When I saw Slade House I knew my time had come to test myself against Mitchell and I'm very glad I did. Thanks to Netgalley and Random House for providing me with a copy of this book in exchange for an honest review.


From “one of the most electric writers alive” (The Boston Globe) comes a taut, intricately woven, spine-chilling, reality-warping short novel. Set across five decades, beginning in 1979 and coming to its electrifying conclusion on October 31, 2015, Slade House is the perfect book to curl up with on a dark and stormy night.

Slade House is a relatively short novel, especially considering the size of David Mitchell's other works. However, it is not technically a stand-alone since it is set in the same universe as The Bone Clocks which I didn't realize until I was too far into the novel to consider even stopping.  The good news is that even independently Slade House is a really interesting and gripping read. Unfortunately, upon knowing that there is more to the story's background makes Slade House at times feel too fleeting and quick. Mitchell happily moves from one decade to the next, telling the reader just enough to keep her entertained but not enough to truly make the reader a part of the story. As a consequence the ending feels almost rushed, with the novel ending before the reader has quite worked out all the intricacies of the actual story. If Slade House is meant to make on curious for The Bone Clocks then it certainly does that.

It's a shame that this novel is so short and, at least in part, dependent on another book because the power of Mitchell's writing style really comes through in Slade House. As he hops from one character to the next, crossing decades and generations, his narration never feels false or forced. He adapts as easily to the voice of a policeman as to that of an insecure female student, painting each character in a painfully detailed way but moving on easily to the next. It's definitely a read to get you in the mood for Halloween with its dips into the paranormal and the uncanny. There is also an aspect of the detective novel to it, with slight thriller influences, as the reader keeps jumping forwards in time in the hope to figure out what exactly happens.

Slade House  entertained me and was incredibly intriguing at times. Although it functions well as a stand-alone it does feel as if it would be more interesting if you've read The Bone Clocks before hand. It was a great introduction to David Mitchell and I'd definitely recommend it to fans of his.
Posted by Juli Rahel at 10/27/2015 12:17:00 pm