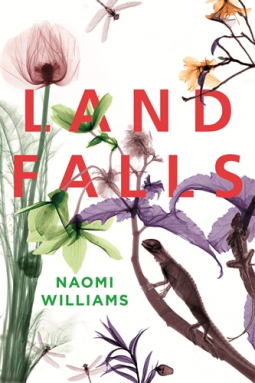 Landfalls is a novel that had me on the edge of doubt until the moment I started reading it. Was this a book for me? Would I be as gripped by it as I was hoping to be? It turned out that I didn't have to worry at all because Williams had me right where she wanted me after the first few chapters. Thanks to Little, Brown and Netgalley for providing me with a copy of this novel in exchange of an honest review.

Multiple-person narratives can be either the best thing for a novel or can be incredibly detrimental to understanding the actual plot of the novel. Each of the characters allowed to speak has to actually add something to the story or else they only serve as a distraction to the reader. Williams takes it one step further in Landfalls and also has different chapters and narrators write in different mediums. You see everything in Landfalls, from straight up first-person narration to seemingly dramatized incident reports. And the best thing is that it all works. Williams weaves all of these different stories, points of view and mediums together into a single, whole story, illuminating the story of a single voyage. Through her switching in narratives, which remains largely chronological, Williams very much makes the reader a part of the exploring party while also giving the reader the chance to try to figure out for themselves what happened to Lapérouse and his crew.

Nothing is as fascinating as exploratory sea voyages. However, nothing is also as marked by historic imperialism and racism. Works such as The Heart of Darkness and Kipling's work have been marked by their ties to imperialism and are often decried for it. However, just as I believe with The Heart of Darkness, Williams' Landfalls is not in and of itself racist. The attitudes of her characters are unapologetic but, as such, are also judged by the novel. With our modern day awareness it is clear to readers not only where these attitudes come from but also why they're wrong. That doesn't mean Landfalls is an easy read. It can be quite difficult at times to swallow the casual dismissal of the native populations by some of our main characters, but Williams also shifts the point of view around by having some chapters narrated by native characters. Although I can't judge to what extent this portrayal is completely successful it definitely adds an extra layer to the novel. It makes Landfalls an intriguing read, giving a fascinating insight into the mindsets of the people of the 18th century.

Williams' writing style is beautifully descriptive throughout Landfalls. An initial reason of mine for hesitating before picking up the book had been whether it would actually capture the "feel" of discovering new places, seeing things no one else might have seen before. Williams put this worry at rest very easily. Her descriptions of different territories, the different people and the different lives are fascinating and each strong in their own right. The only addendum I have to this statement is that throughout the text there occasionally pops up an authorial voice which, at times, feels out of place because it's not entirely clear whether this is indeed the author looking over her character or an "in-text" author looking over his findings on the journey. Since this voice seems to speak from hindsight it adds a lot of interesting comments to the text, but it also always brings the reader back outside the story.

I absolutely loved Landfalls and it is a novel I will no doubt be rereading. This may not sound like a compliment but there aren't a lot of contemporary novels which I feel that need with. I'd recommend this to fans of adventure novels and aren't afraid of novels that switch it up a bit.
Labels: 18th Century Female Authors Historical Fiction Imperial Attitudes Landfalls Little Brown Book Group Multiple Narrators Naomi J. Williams netGalley Review Seafaring tw: racism