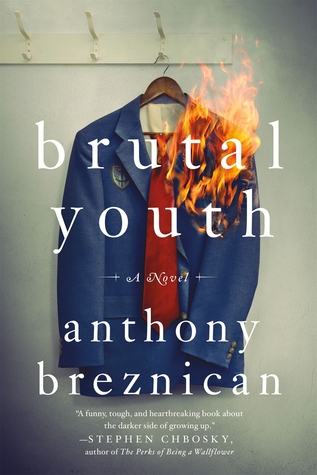 I'm honoured to be a part of the blog tour for Brutal Youth by Anthony Breznican today! I spotted this book even before I was approached for the blog tour and I couldn't wait to get my hands on it and read it. It's a fascinating novel, one which is brutally honest as well both in style and in content. Thanks to St. Martin's Press for providing me with a copy of the book in exchange for an honest review.


Three freshmen must join forces to survive at a troubled, working-class Catholic high school with a student body full of bullies and zealots, and a faculty that's even worse in Anthony Breznican's Brutal Youth

With a plunging reputation and enrollment rate, Saint Michael’s has become a crumbling dumping ground for expelled delinquents and a haven for the stridently religious when incoming freshman Peter Davidek signs up. On his first day, tensions are clearly on the rise as a picked-upon upperclassmen finally snaps, unleashing a violent attack on both the students who tormented him for so long, and the corrupt, petty faculty that let it happen. But within this desperate place, Peter befriends fellow freshmen Noah Stein, a volatile classmate whose face bears the scars of a hard-fighting past, and the beautiful but lonely Lorelei Paskal —so eager to become popular, she makes only enemies.

To even stand a chance at surviving their freshmen year, the trio must join forces as they navigate a bullying culture dominated by administrators like the once popular Ms. Bromine, their embittered guidance counselor, and Father Mercedes, the parish priest who plans to scapegoat the students as he makes off with church finances. A coming-of-age tale reversed, Brutal Youth follows these students as they discover that instead of growing older and wiser, going bad may be the only way to survive.

Sometimes you read a book that grips you way faster than you expected. Breznican's Brutal Youth does exactly that. The 'brutal' in the novel's title doesn't just refer to the youth that populates its pages but also to the tone with which it addresses the reader. There truly is no way of escaping the brutality and cruelty of Saint Michael's except closing the book but that very quickly stops being a possibility. Breznican's prose doesn't shy away from being brutally honest, but that is exactly what makes this novel so gripping. It has snappy dialogue, great descriptions and a diverse catalogue of characters which are both great inventions but also very recognizable. To a certain extent this novel is reminiscent of some of the great 80s high-school movies such as Heathers and The Breakfast Club, both in its seeming ridiculousness and in its serious undertone.

The novel also picks up on a tradition which has always seemed slightly terrifying to me: hazing. Whether it's at high-school or at university, I have managed to avoid hazing which just seems another word for sanctified bullying. Bringing together the genuinely blind eye that school administrators turn towards this "tradition" and the paradoxical victim-perpetrator role that most people involved with it fill, Brutal Youth offers a great look at hazing.

A lot of books in the last few years have taken struggling high-schoolers as its topic, relying on the recognizability of their struggles to cover up the fact that they've forgotten those exact struggles. Breznican manages to actually bring back memories of this strange phase between childhood and young adulthood, in which friendship is both the safest and the most dangerous thing, where a crush can make or break a reputation which is built on almost innocent lies. Whether it's the vindictive nature of school-generations that makes one year take out all their frustration on another, or the seeming endless gap between school-life and home-life, Breznican has put it all in his novel. Brutal Youth will remind you of the less fun moments of your own high-school career, but you'll want to keep going.

Breznican switches between two of his main characters, giving the reader their own unique points of view and own inability to rationalize their actions. At times it can be confusing to have more than one narrator, especially when the switching doesn't truly add anything to the story. In the case of Brutal Youth, however, with its secretive and confused main characters, the moving between houses, families and lives really enhances the story. It also allows the story to not just focus on the younglings, who it's so easy to blame for everything. The parents in this novel are as genuinely messed up humans as their children are turning into, both to blame for so much and yet the victim of so much as well. It's exactly that balance between guilt and innocence that every character in Brutal Youth keeps finding, making it impossible for the reader to ever truly come to a final judgement on any of the characters.

Brutal Youth is an absolutely stunning novel which grabbed me by the throat straight from the start and didn't really let me go till the very last page. This novel has to be one of my favourites published so far this year and I definitely won't be forgetting about it any time soon. I'd recommend this to pretty much everyone since it's one of those books that you simply should read.
Posted by Juli Rahel at 10/07/2015 02:02:00 am