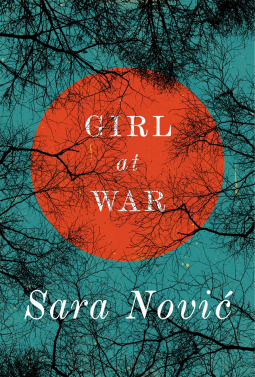 Sometimes you hear of a book and realize that you simply have to read it. For me, Girl at War was that kind of book. From the moment I read the blurb I was intrigued and looking forward to reading about this part of European history. I want to thank Netgalley and Little, Brown for providing me with a copy of this book.


Growing up in Zagreb in the summer of 1991, 10-year-old Ana Juric is a carefree tomboy; she runs the streets with her best friend, Luka, helps take care of her baby sister, Rahela, and idolizes her father. But when civil war breaks out across Yugoslavia, football games and school lessons are supplanted by sniper fire and air raid drills.

The brutal ethnic cleansing of Croats and Bosnians tragically changes Ana's life, and she is lost to a world of genocide and child soldiers; a daring escape plan to America becomes her only chance for survival. Ten years later she returns to Croatia, a young woman struggling to belong to either country, forced to confront the trauma of her past and rediscover the place that was once her home.

Girl At War is a haunting, compelling debut from a brilliant young writer, rooted in historical fact and personal experience. Sara has lived in the States and Croatia, and her novel bears witness to the haunting stories of her family and friends who lived through the height of the conflict, and reflects her own attempts to come to terms with her relationship to Croatia and its history. It is an extraordinary achievement for a novelist of any age, let alone age 26.

Sara Nović's novel is an absolutely enthralling read. Nović writes on relentlessly, no matter what she is discussing and how it might make her readers feel. It is incredibly important to have novels like Girl at War that tackle periods of history that aren't often discussed and do so in an open and honest way. Ana is a really interesting character, both an unreliable narrator and incredibly emphatic. The narrative doesn't move chronologically, meaning that the reader, at times, feels equally disjointed as Ana. Nović also doesn't shy away from not always giving an answer to the questions that she asks. How does one move on from spending their childhood seeing their country torn apart? How does moving away change your feelings about your home country? Having a child be her main character, Nović is able to both give the novel the sense of potential redemption while also having it be strangely depressing.

For the fact that this is a debut novel, Nović has an incredibly strong writing style which really gives her a voice throughout the novel. She manages to find a way to fluidly move between time periods and from horrendous war crimes to family memories. Nović tells Ana's tale in a way that is almost understated without censoring herself. She doesn't employ overly sentimental language in order to draw the reader in but rather lets the gravity of her story do that which makes it a very mature novel. Girl at War is not only a novel about war, but also about a girl. Ana is not only a survivor, but also a sister, daughter and friend. Nović doesn't let war consume her novel, which means that throughout her novel there is a ray of hope that not only Ana will be fine, but that her whole country will be.

Our world is no stranger to war and yet a lot of war occurring all around the world right now seem strangely far away. Although I was very young, technically too young, to really remember the start of the Yugoslav War, it was something I consciously grew up with. Being Dutch, the massacre at Srebrenica was something that weighed heavily on my mind. While the Yugoslav War was the background for some of the biggest war crimes committed since the Second World War, there doesn't seem to be a lot of attention for it. It's very gratifying to see such a strong novel coming out of such a horrendous time in European history. With this kind of conversation about such topics, the hope is that we can eventually prevent it from happening again.

Historical fiction can be a difficult genre because an author has to be able to find the perfect balance between the history and the fiction. In the case of Girl at War, how much time is enough to spend on the war and how much is too much? No one wants to read a fiction novel with footnotes, whereas a history book with fictional accounts is also not very desirable. Nović's novel strikes a perfect balance which allows the reader to acknowledging the history as the background to Ana's life but also to never forget the gravity of the history.

Girl at War is an incredible read which deserves to be read by everyone. Ana is a fascinating character and Nović writes her life-story beautifully. Girl at War brings light to an era in European history which seems to be pushed out of the limelight a lot. The novel is both heart-breaking and beautiful and it will keep you captivated until the very last word.
Posted by Juli Rahel at 5/21/2015 12:05:00 am