Review: 'Little Wars and Floor Games: The Foundations of War-Gaming' by H.G. Wells 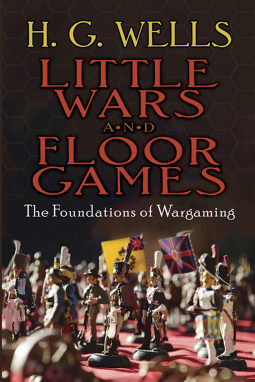 H.G. Wells is one of my favourite authors and his The War of the Worlds one of my all-time favourite novels. As such there was no hesitation on my part when I saw this book become available. Little Wars and Floor Games seems to exist in the space between manual and satire and is as such a strangely interesting read. Thanks to Netgalley and Dover Publications for providing me with a copy of this book.


Ironically enough, one of the twentieth century's leading pacifists wrote Little Wars, a book that has entertained and enlightened war buffs for the past hundred years. H. G. Wells, the great science-fiction pioneer, turned his attention from tales of time travel and alien invasions to write the first classic book of war games. His simulations of past battles and hypothetical future clashes allow readers to test their tactical and strategic skills and attempt to rewrite history.

The companion piece, Floor Games, offers a more lighthearted look at war games. Based on the playful battles Wells waged with his sons, the narrative describes how creative play with miniature figures can transform an ordinary room into a magical world. The book has since been hailed as an inspiration for the development of a nonverbal psychotherapeutic method employed in the treatment of adults and children. Both Little Wars and Floor Games feature winsome illustrations by J. R. Sinclair that enhance their antique charm.

Dover Publications excels in bringing rare works by well-known authors back into public view. H.G. Wells is one of the 20th century's most famous authors thanks to works such as The Time Machine and The Island of Dr. Moreau. As the blurb states, Wells' was a convinced pacifist and one of the joys of Little Wars and Floor Games is to notice his criticism of actual, or as he calls it Great, war. Floor Games, despite being written first, is added to the later Little Wars as an addendum. Whereas Little Wars focuses completely on war-games and their rules as played by grown-ups, Floor Games focuses more on children and how they play. I personally enjoyed Floor Games more since an active imagination is what I live on.

More than anything, I would argue that Little Wars and Floor Games is a book about and for the imagination. A familiar sight at many kindergartens and primary schools is children huddled together shouting about all kinds of rules before engaging in a 'no holds barred' game. I have also never met anyone who didn't know about the 'the floor is lava'-game. The need to create and play together seems to be universal. Wells' enthusiastic writing style of such play and detailed description of painstakingly created huts and roads infuses both novellas with much-needed spirit. Were it not for Wells' own encouragement and passion, Little Wars and Floor Games would just be another dry manual. As it is, it is a read with which time flies.

As a novella on war games, it is almost impossible for H.G. Wells not to descend into imperialist and colonialist ways. Especially when discussing the Game of the Wonderful Island, there seems to be a blatant acceptance of the fact that women and non-British men are disenfranchised. The difficult thing with books from different eras is that there will undoubtedly be attitudes represented which we nowadays would consider antiquated and potentially even offensive. I'd argue that, instead of therefore ignoring these books, it is important to confront yourself with these sentiments. Although there is, of course, no truth in racial prejudices, it is interesting to see how easily such attitudes enter into culture and how hard it is to get rid of them.

Although I didn't find Little Wars and Floor Games a fascinating read, it was kept entertaining by H.G. Wells' sense of humour which came across perfectly in his writing. It is, however, definitely not for those not interested in war games or floor games. J. R. Sinclair's drawings greatly add to the charm of the book and illustrate Wells' explanations beautifully.
Posted by Juli Rahel at 5/19/2015 12:17:00 am