Review: 'The Elite' by Kiera Cass 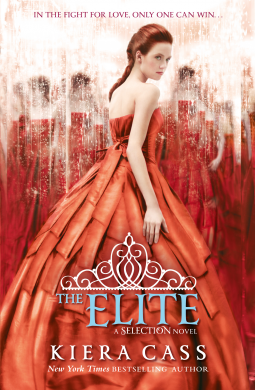 Last week I reviewed The Selection, the first part of Kiera Cass' series called The Selection. I was, unfortunately, not a major fan and didn't quite know what the hype was about, but still wanted to read The Elite in order to see whether Cass developed her story more. Thanks to Netgalley and Harper Collins for providing me with a copy of this book.


The Selection gets fierce as rivals stake their claim on the prince.Six girls, one life-changing prize…

America Singer will leave her pre-destined life for a world of glamour and luxury, if she wins…

But surviving The Selection is tough. Rivals are battling to become Prince Maxon’s bride as the threat of rebel violence just beyond the palace walls escalates into war.Only six girls are left and sworn friendships are tested to breaking point. America’s feelings for Maxon grow stronger, but she suspects darker mysteries in his royal past. With exlover Aspen waiting for her in the shadows, where do her loyalties truly lie?

I wasn't a very big fan of The Selection. Although the plot-idea had potential and could have been very interesting, I felt that Cass rushed through the moments that could've been interesting while lingering on stereotypical YA-novel moments. In that sense, The Elite is a definitely step forward. Cass builds up her other characters, showing the readers different sides of America's rivals without entering into wrongly judgmental territory. Rather than let uneventful months pass within sentences, Cass chooses a shorter time period for her characters and shows us how they each react to different situations. For some characters this means you discover new depths to them whereas others look worse in comparison. Personally this was something I really enjoyed since no one is ever black and white.

There is something strangely interesting about this novel and series which I had to talk about with a blogger-friend of mine who is also reading the series. Although I'm still not entirely gripped by the prose and the development of the story, I do find myself wondering how Cass will take the story to its inevitable end. In that sense the whole The Selection series, but especially The Elite, is perfectly described when compared to reality tv shows such as 'The Bachelor'. The lives played out in front of the reader are not new or surprising, yet there are small twists and turns within the narrative that keep your interest going. There is a desperation about not missing something that might be different or may play out in a way you weren't expecting. What this leads to is that if the genre of The Elite isn't exactly yours then you'll most likely end up disappointed with the end results of the book.

I wrote about love-triangles a while ago and wondered at the time whether I was being too strict about it. While reading The Elite I was both sad to see that my fears were once again proven just. Love-triangles don't give women more agency or power, rather they reduce them to something to be desired and fought over by men. Often these women don't have a say in their own love-lives and have to accept that because the men love them they keep getting into sticky situations. And this usually leads to them being blamed as well. In this book I felt like America was constantly apologizing for the feelings of others, rather than actually focusing on her own. However, I was also glad to see Cass herself pick up on this and have America demand more of her own time, although so much emphasis was put on this that it seemed incongruous with the supposed time-pressure in the novel. Also interesting about this continuation was the increased effort towards world-building. Although I enjoyed this, it also feels as if we're mainly given background whenever it fits the story, rather than be there to support the reader.

The Elite, as a sequel, definitely improves on its predecessor, The Selection. However, it is still plagued by the same issues: relatively predictable plot and a love-triangle. However, The Elite also has some twists and turns which I didn't see coming.
Labels: 3 Universes Dystopian Female Authors Female Characters Kiera Cass Review sequel The Elite The Selection YA