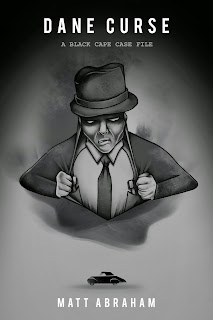 It's time for another Spotlight post and I'm excited to present to you Dane Curse: A Black Cape Case File by Matt Abraham. It's a fast paced book, mixing together a classic gumshoe feel with sci-fi. Self-published, this novel sounds unlike most of the books I've come across lately.


When a black cape gets the big goodbye, and their family wants answers, they hire Detective Dane Curse. As a former super villain himself he knows all the curves and all the angles, and he lends a hand to those in need because sometimes even the unjust deserve a little justice. But that all changes when a mysterious murder threatens to plunge the city into a super powered war, and the only chance of stopping it is if Dane finds the killer in five days’ time. Getting to the truth won’t be easy though. He’ll have to face ruthless black capes with secrets to hide, a powerful government agency bent on national expansion, and even teams of white caped heroes whose intentions are less than pure. No easy task for a small time PI, so Dane will need every bit of his guts, strength, and experience if he’s going to find the killer, save his city, and maybe even get some justice for the greatest hero the world has ever known.

About the Author:
As a longtime fan of classic pulp detective novels and super-heroic derring-do Matt Abraham blends both genres in a style that is part Raymond Chandler, part DC Comics. His recently released novel ‘Dane Curse’ follows a former super villain turned PI as he navigates the treacherous powered underbelly of Gold Coast City. Though born in Wilmington, Delaware Matt currently lives in Ningbo, China by way of Hawai’i and Singapore, with his wife and cat who both tolerate his fiction addiction with grace and aplomb.

Find the book and author on: Amazon, Goodreads

And, as always, I'm excited to present you with an excerpt from the first chapter of the book. Here goes Dane Curse.

Nobody sheds a tear when a black cape catches one in the back. In fact, discovering there's one less villain in the world is how the citizens of Gold Coast City prefer to start their morning. It doesn’t matter if the body’s found floating in Bittenbach Bay or dumped down Grime Alley, they’ll eat those details up like butter and toast, then head out to face the day like they put some comfort, instead of cream, in their coffee.

It’s not so rosy for the black cape though. Guy or gal, they’re quick shuffled through an autopsy, and if the body isn’t claimed as almost none are, it’s up to Ayers Hill with no one there to see them off save the man who dug their hole. I was headed for that fate myself, back when I ran with bad men and threw Buicks at heroes. I didn’t carry business cards, but if I had they’d have read: Dane Curse-Super Powered Villain-Dark Deeds Done Daily. But that’s not me, not anymore, and not for a long time now. I wised up and took the cape off my back, and the bull’s eye off my chest, and while I’m not proud of my old life I’m not ashamed of it either. It gave me one hell of a skill set, and a unique point of view.

See, behind their masks and hoods and threatening names, behind the powers and pulse cannons, black capes are people like everyone else. And like everyone else they have children and spouses and parents and friends who love them a whole lot, and miss them just as much when they meet the big goodbye. Don’t get me wrong, they’re not the best people in the world, but that doesn’t mean each one deserves the death penalty. And for those that get it, well, not every one of them dies clean.

But when that fate befalls regular people there’s the system to turn to. With just a phone call the police leap into action practically falling over themselves trying to catch the killer. But for those other people, the ones unlucky enough to love a black cape, when they lose that someone special there’s no one to get to the bottom of the who-did-what-happened. When they need a hand there’s no one to help.

So if you lose a black cape, and can’t go to the cops, then you come to me because that’s what I do. I’ve been in the game for years, I know all the curves and all the angles, and if it gets rough then so be it… I got plenty strength, I’m double tough, and I never quit. And if need be I’ll pull my artillery to get you some answers, because I don’t care about the mistakes you’ve made or how you chose to live your life, sometimes even the unjust deserve a little justice.