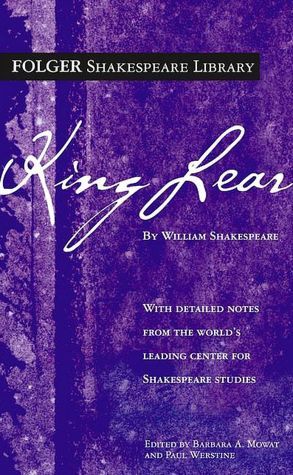 I've finally chosen two movies to analyse for one of my essays this term and those are Ran and Kumonosu-jo (Throne of Blood) by Akira Kurosowa. They are Japanese adaptations of King Lear and Macbeth respectively. His cinematography is stunning and he was a major inspiration for George Lucas, which is always a plus in my book. Anything Lucas-related is! So I have decided it is time to reread these plays so I know exactly how these films adapt the plays. Tuesday Intros is hosted by Diane over at Bibliophile by the Sea and Teaser Tuesday is hosted by MizB over at Should Be Reading.
I have started with King Lear.


One of Shakespeare's finest tragedies, the work displays a pessimism and nihilism that make it a 20th-century favorite. The aging King Lear decides to divide his kingdom among his three daughters, allotting each a portion in proportion to the eloquence of her declaration of love. The hypocritical Goneril and Regan make grand pronouncements and are rewarded; Cordelia, the youngest daughter, who truly loves Lear, refuses to make an insincere speech to prove her love and is disinherited. The two older sisters mock Lear and renege on their promise to support him. Cast out, the king slips into madness and wanders about accompanied by his faithful Fool. He is aided by the Earl of Kent, who, though banished from the kingdom for having supported Cordelia, has remained in Britain disguised as a peasant.


'Kent: I thought the King had more affected the Duke of Albany than Cornwall.

Gloucester: It did always seem so to us, but now in the division of the kingdom, it appears not which of the dukes he values most, for equalities are so weighed that curiosity in neither can make choice of either’s moiety.

Kent: Is not this your son, my lord?

Gloucester: His breeding, sir, hath been at my charge. I have so often blushed to acknowledge him that now I am brazed to ’t.' l.1-11

The play starts straight off with a reference to sons and kingship and the division of the kingdom. In Ran they have replaced the daughters with sons, so it's quite interesting that the play starts with men as well.

'Regan: Our troops set forth tomorrow. Stay with us. The ways are dangerous.

Oswald: I may not, madam. My lady charged my duty in this business.

Regan: Why should she write to Edmund? Might not you Transport her purposes by word? Belike, Some things—I know not what. I’ll love thee much— Let me unseal the letter.

Oswald: Madam, I had rather—

Regan: I know your lady does not love her husband;I am sure of that; and at her late being here,She gave strange eliads and most speaking looksTo noble Edmund. I know you are of her bosom.' 4.v.l. 18-30

My essay is focusing on the female characters in the film, especially since Lear's daughters are replaced by sons, so I really enjoyed this moment because it shows Regan's control and power.