Intro Tuesday and Teaser Tuesday - 'The Fountainhead' by Ayn Rand 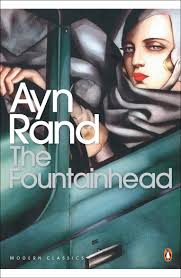 This week I'm sharing one of my all-time favourite books with you: The Fountainhead by Ayn Rand. I read this book for my 100 Classics list during my first year at University and was completely sucked into it. This book, quite genuinely, changed the way I looked at literature and what it could achieve. Click here for my review, in case you want to read my initial thoughts on it!

Yesterday I was in the library, casually strolling down the aisles, wasting time. Then I saw this one and was reminded of reading it for the first time and had to take it home with me. Its 700+ pages simply flew by the first time and I am rereading it now, once again getting sucked into it. I'm already a 100+ pages in and I don't even feel like I've been reading for that long!

'Howard Roark laughed.He stood naked at the edge of a cliff. The lake lay far below him. A frozen explosion of granite burst in flight to the sky over motionless water. The water seemed i movable, the stone flowing. The stone had the stillness of one brief moment in battle when thrust meets thrust and the currents are held in a  pause more dynamic than motion. The stone glowed, wet with sunrays.The lake below was only a thin steel ring that cut the rocks in half. The rocks went on into the depth, unchanged. They began and ended in the sky. So that the world seemed suspended in space, an island floating on nothing, anchored tot he feet of the man on the cliff.His body leaned back against the sky. It was a body of long straight lines and angles, each curve broken into planes.' p.1

I simply love this beginning. I will admit to not quite understanding it the first time, but now I can really appreciate the beauty of Rand's writing and her descriptions. Especially the line before the last, 'His body leaned back against the sky.', is absolutely beautiful!


'Ralston Holcombe had no visible neck, but his chin took care of that. His chin and jaws formed an unbroken arc, resting on his chest. His cheeks were pink, soft to the touch, with the irresilient softness of age, like the skin of a peach that has been scalded.' p.108

Again, Rand's descriptions simply overwhelm me. The first line is just beautifully sarcastic, but then the following two sentences are so gentle in their description of this old man. I love her ability to transition between two different tones so easily.

So, what are you guys introducing and teasing today? Do you think you'd like The Fountainhead? Or do the 700 pages sound a bit terrifying?