2007 'Persuasion' and the Romantic Psychological Unravelling Here's a bit of a rambling post with some of the thoughts I had after watching Persuasion (2007) by Adrian Shergold again this week. It's one of my favourite Jane Austen adaptations and I think it does quite some interesting work in how it films the story which is, essentially, romantic, in a way that creates suspense.

Jane Austen's books are often considered, usually by people who haven't read them, to be over the top romances and "all about love". This translates itself into the film adaptations as well, where everything is soft, brightly coloured and beautiful. Persuasion is at its simplest level about two lovers finding each other again and realizing they never stopped loving each other. I doubt there is a more romantic scenario out there and nothing was stopping Adrian Shergold in 2007 from drawing the narrative in pretty colours, sweeping camera pans and most of all the existence of the fourth wall. I am convinced that in most romantic films the distance between the screen and the audience is crucial, because these films are meant as escapism and diverting attention from the audience's own life. Although we imagine ourselves into romantic films, we do so because their world is closed, there is no outside influence from the audience into the romantic film. You don't see any of the actors addressing the camera in Love Actually, Four Weddings and a Funeral or The Other Woman. Now, how did the 2007 Persuasion differ?


During the editing process, a decision must have been made to select a very cool (in the sense of temperature), almost blue overlay to the whole film. It creates a detachment between the audience and the film, which is much more reminiscent of psychological thrillers and suspense films, which consciously ramp up the almost clinical aspect of the laying bare of their main protagonists.
From the beginning of the film Anne is the only thing the audience can focus on. Although we are used to a single character as our protagonist and therefore the person we root for, the insistence with which Shergold focuses on Sally Hawkins creates a more intense focus. We start with a close-up of her face, with Hawkins' eyes flicking to things we can't see. Her still stature makes her resemble one of the many still objects in the room which belong to the house. The camera then continues to swirl around her and follow her as she walks through her house and taking the inventory. For Anne Elliot, Kellynch Hall is the only stable aspect of her life. It is where her life is rooted. It is an interesting choice then when Shergold doesn't show the audience any of it in favour of following Anne and moving around her. Maybe he is suggesting that Anne is part of this house and that by showing her in it, he is showing it.

The camera seems inextricably tied to Anne throughout the whole film, only occasionally abandoning her in favour of scenes with other characters, so she is often the cause for the audience being introduced to new settings. How are these settings, and Anne within them, framed, then, in a way that is not "romantic"? With Anne as our focus point, it is important to look at how she is presented. Her clothes are a lot plainer than those of most around her and always in deep yet calm colours. There is no vibrant red but rather a dark maroon, for example. She is sedate and calm and perfectly fits into the background of the screen. Her clothes seem to emphasize how she is seen by most people around her, as part of the furniture. This works in two ways: for some, especially her father and older sister, she is just something to be used at their leisure, whereas for others such as Mary and her husband's family, Anne is a welcome addition to their lives especially because she is as reliable as their furniture. Anne, then, seems to be something stable within herself, something established and settled. Remember the opening scene and the sense that Anne is as much part of the house as the covered up mirrors.

Anne's stability, then, is shaken up by the arrival of Captain Wentworth. In the stable, cool environment of Anne's world, where she operates in the background and has accepted her position, Wentworth's presence cracks her walls. It is after knowing that the Crofts will move into Kellynch with her only half a mile away, then, that Sally Hawkins first breaks the fourth wall. This is, of course, not a coincidence. Wentworth's potential presence unravels her control of herself and she shares her thoughts with the audience and gives them a sideway glance. As the audience we are almost in her confidence then. We are present at a deeply personal moment, Anne writing in her diary, but she doesn't want to confront us, the audience and reality, straight on. Now that we are in her confidence the camera occasionally moves away from her, but only to tell us more about her history. 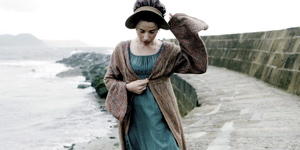 The first time Sally Hawkins looks at the camera head-on is when she is offers to stay with the young child and miss out on the chance to attend a dinner and see Captain Wentworth again for the first time. Straight after we see her writing in her diary and this time the camera is extremely close to her crying face. From there on, the glances are frequent and always during moments that are emotionally intense. The audience is now inextricably tied to Anne and her emotions.


The constantly moving camera also places us in the role of spectator. When the camera isn't backing Anne she is quite often set in the background of the frame, with other characters in the foreground. This means that those characters are framed between us and Anne, making them something we can both regard and consider. Quite often this is Mary, which is especially interesting in this context. The actress clearly made the decision to ramp up her insecurities and hypochondriacal nature and it is fascinating to see that her inability to hide her need for companionship and admiration is what pushes others away. She becomes almost sweet in her need for Anne, were it not so annoying. His constant framing of characters between others means that Shergold is making us observe them in social situations, watching them expose their own secrets and emotions in the small moments between two sentences. He captures a look or an intake of breath, contrasted by moments of almost trained eloquence and charm.

I can hardly discuss the whole film here, so I'll move on to the end with only a few words. Throughout the whole film the camera is always a friend to Anne. Not in the sense that it always portrays her flatteringly, but that it joins her in her observations and slowly opens up the other characters. Louisa is shown as foolishly stubborn, Elizabeth Elliot as vain and quite possibly scared of losing her position, and Lady Russel as quite deluded. A lot of this work is done through the pale colours present throughout the film which are only occasionally interrupted by brightness. Even the wildness of the sea is all cast in white, grey and pale blue. Bath is equally colourless, especially the Pomp Rooms who blaze in their whiteness and non-descriptness.

The controversial ending then, with Anne running through Bath trying to find Captain Wentworth is, in my opinion, a quite logical conclusion. The restraint shown throughout most of the film by Anne ends here in a violent burst of energy. Is it true to the time period? No. But does it work, symbolically, to show that Anne has made up her mind? Yes. It also creates a perfect lead-up to the final kiss, which in itself is the most suspenseful moment in the film. Having seen the film repeatedly I know they will, in fact, kiss, and yet the tension in Wentworth's body which seems to make him incapable to bow down to her and the straining in Anne's to reach up to him make me tingle. The continuous shot goes on for a very long time, almost too long, and the intimate closeness of the camera means that finally we see these characters laid bare. Wentworth and his imagined wounded pride almost prevent him from gaining his love back, whereas we finally get to see the passion and desire that exists within Anne.

There is a lot more to say in a lot more coherent way. The BBC set out to make new Jane Austen adaptations which each had their own tone and revealed something new about the story. Shergold manages to capture some of Jane Austen's ability to pick up on the small things we do that reveal so much about us.
Posted by Juli Rahel at 11/29/2014 03:24:00 pm