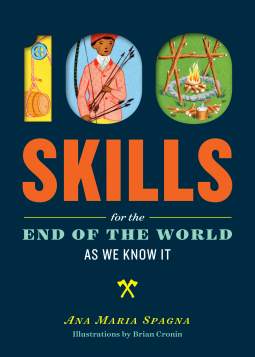 It's Tuesday and I think I have a really funny book for you guys, which will hopefully give us some fun teasers! Tuesday Intros is hosted by Diane over at Bibliophile at the Sea and Teaser Tuesday by MizB over at Should Be Reading. This week's books is: 100 Skills for the End of the World as We Know It by Ana Maria Spegna.

What skills will you need after a global catastrophe? Whether it’s the end of oil, an environmental disaster, or something entirely unforeseen, Ana Maria Spagna outlines 100 skills you’ll find indispensable for life after the apocalypse. Once the dust has settled, you’ll need to know how to barter, perform basic first aid, preserve food, cut your own hair, clean a chimney, navigate by the stars, stitch a wound, darn socks, and sharpen blades. You’ll also want to build a stable and safe community, so you’ll need to master the arts of conversation, child raising, listening, music making, and storytelling. This fascinating and entertaining book, full of quirky illustrations by artist Brian Cronin, will provoke surprise, debate, and laughter while it provides a road map to greater self-reliance and joy, whatever the future brings.

In my first class as a high school freshman, I entered the room to find every inch of every blackboard covered with numbers. Huh? The teacher, a biblical scholar, tried to get us to guess what the numbers were. Lottery numbers? Algebraic formulas? Secret codes?? No. They were dates, we could tell that much, but for what?

Eventually he explained that these were all dates on which someone, likely a propher, had predicted that the world would end. Since then, we've survived a predicted apocalypse a few times, from midnight 1999 to the 2012 Mayan calendar deadline, and so far we're safe. p.1

I initially only wanted to include the first paragraph but then thought that was a little bit too cruel. So far I really like the tone of it. It's both light, funny but hopefully it will also become informative. I mean, I have to survive the apocalypse somehow!

How to forecast weather withut satellites or radar? Watch the sky.' p.49

There is, of course, a lot more to the chapter on Cloud Reading but I love the abruptness of it. This book, I feel, will be a lot of fun!

So, what are you teasing with? And do you think you could survive an apocalypse?
Labels: 100 Skills for the End of the World Ana Maria Spagna Brian Cronin Teaser Tuesday Tuesday Intros