Review: 'This Should Be Written In Present Tense' by Helle Helle, translated by Martin Aitken 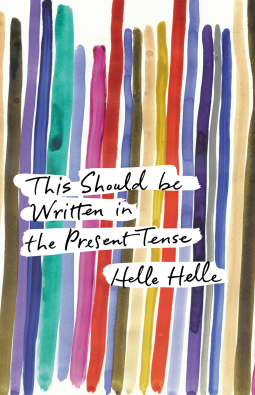 I saw this book on Netgalley and two things drew me in about it. First was the synopsis which, in its bareness, was one of the most interesting ones I had read. And then there was the draw of reading something Scandinavian. I had never heard of Helle Helle and I think it's a shame that the only Scandinavian literature that really makes it to the rest of Europe is its thrillers and crime novels. This Should Be Written In Present Tense is an example of the kind of magnificent books we're missing out on.

Now, Minimalism is a hard thing to get right. In art I hardly ever understand it because I want to look at more than just a blue square or a dot on a blank page. However, within literature I have started to gain an appreciation for it, especially after reading Samuel Beckett's Waiting for Godot. In a world that is increasingly over-using adjectives, it is almost calming to find an author who is sparse with her words, doesn't over-dramatize the colour of someone's eyes and in which I as the reader can make up my own mind about the characters rather than be forced into someone's head. Helle leaves the reader completely free as her narratives moves from present to memory and back quite happily all on its own. If it wouldn't be too cliche I'd say that this novel flows on its own and it's up to the reader to decide whether he wants to jump in or not. It is incredibly rewarding to jump in though. Martin Aitken does a great job at translating. A lot of spirit can be lost in translation but he has managed to, I think, capture both Helle's style and the stripped back quality of the narrative.

The plot is really quite simple and it is in that, that most of its beauty lies. Dorte is a normal university student with a life that is, although normal, fascinating in the fact that it is so normal. Whether it is parents who are almost strangers to a life that isn't quite yours but somehow is, a lot of moments in this novel are very recognizable. What a lot of authors and readers seem to forget is that in stories we look for something that is relatable. It doesn't matter whether your character lives in the 15th century, as long as he or she acts like a human being. Sadly, a lot of authors run wild on the details and forget to create characters that act like genuine people. Helle would have faced the opposite problem, in which her character is so normal that you wonder what exactly you're reading this for. However, in Dorte and her life she created a story that is at once very natural for the reader to empathize with and on the other hand just personal enough to Dorte that there is distance between the characters and the reader.

A different review said that many of Helle's sentences are works of art all in their own and that is definitely true. There are, in many places of the book, sentences that completely change the whole chapter that went before it. There are sentences that change your whole outlook on a character or a place. I think this is quite special, but it is also something that comes with Minimalism. If you only write down the words that are important, your book is bound to be filled with a lot of important words. However, there is also the precarious balance of a novel being too spacious, leaving too much up to the reader which means he will most likely, eventually, get lost in your novel. I've compared this book to Scandinavian architecture in a different post and I did so for a reason. Their style of building is at once stern and precise but on the other hand also uses a lot of natural material and put an emphasis on light and room. This novel works in the same way. In This Should Be Written in Present Tense Helle creates a strong backbone of a story that doesn't budge but moves steadily forward, but around it she brings in space and light which allows the reader to explore her writing.

I was doubting between 4 and 5 for a while, but I had a hard time putting this novel down and I will definitely be picking it up again and those are, for me, pretty strong signs that this is a strong novel. Helle Helle is a revelation to me and I would definitely recommend this book to people who enjoy reading realistic and minimalistic books. If you have never tried either, this one might be a good place to start!
Labels: Denmark female character female protagonist Helle Helle Martin Aitkin Minimalism netGalley Random House Realism Review Scandinavian This Should Be Written In Present Tense