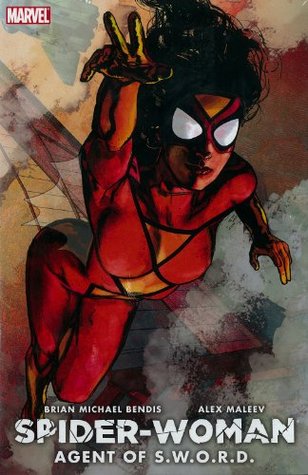 I never used to read comics as a child, unless Donald Duck counts, because somehow they weren't really on my radar. However, I would categorize myself as a massive geek, which means that the projects Marvel has brought to the silver screen in the last few years have brought me a lot of joy. I love the mix between fantastical, sci-fi and so much more that you find in superhero movies. Although at times I think that superhero narratives allow for lazy writing and characterization, Marvel has been doing really well. I decided to expand my knowledge of superhero and Marvel knowledge and picked up the Spider-Woman comics.


The team of Brian Michael Bendis and Alex Maleev return to a Marvel comic for the first time since their Eisner award-winning run on Daredevil. Ripped from the pages of Secret Invasion and New Avengers, this explosive chapter follows the new adventures of Jessica Drew, aka: Spider-Woman, as she rediscovers her life in a world she did not make. Collects Spider-Woman #1-7.

I saw a post about Spider-Woman and wondered about her and her story. I was afraid she would be a female version of Spider-Man. However, I was thrilled to find out that Jessica Drew is her own character through and through. This run of comics, seven issues in total, is set after Jessica's body and life had been taken over by the Queen of the alien Krulls. Upon returning she doesn't know who her friends are and what she can do. I really enjoyed this as a starting-point for a "superhero". The superheroes we tend to see are conflicted but also surrounded by people who want to help, they have friends in places they never expected them and they get to prepare for their big battle. Jessica however starts from nowhere and it's not quite clear where she is at the end. It makes her very relatable. Although she has a terrible history, she never quite gives up and as such she is quite an inspiration. I will later be writing a more in-depth post about her as a character.

Bendis has given Jessica a very strong voice that consistently talks to the reader and brings her experiences very close. Of course a comic can't rely on interior monologue the way a novel does, but Benis manages to just have the right amount of Jessica's thoughts in there. I was also really glad to find out the dialogue wasn't too cheesy. Sometimes I come across panels from older comics and the dialogue is so cliche it is impossible to get through with a straight face. Although I've seen some controversy around Bendis and the way he treats women in his comics lately, I was extremely pleased with how he portrayed Jessica in this comic. She is blase, scared, strong, powerful and human all at the same time and it is in multi-dimensionality that characters gain depth and thereby become sympathetic.

Alex Maleev's drawing style is absolutely gorgeous and was definitely one of the major draws for me. Maleev and Bendis were going for a style that would also translate well into the show they made based on this series and it really does look 3D, in the best kind of way. They have combined depth and colour in a interesting and captivating way that makes Agent of S.W.O.R.D really special. Dealing with superheroes, supervillains and aliens, you don't want your illustrations to look too plain or ordinary since your characters are everything but ordinary.

I give this series...

I am definitely going to read these comics again and they were crucial in solidifying my love for Jessica Drew, a.k.a Spider-Woman. On the one hand it's quick entertainment, compared to plodding through a massive novel, but it's a great launching platform from which great debates can be had. Definitely check this out if you're a comic fan because everyone needs Jessica Drew in their life!
Posted by Juli Rahel at 9/03/2014 10:13:00 pm