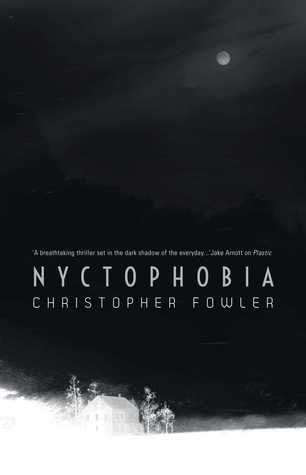 I requested this novel on a hunch from Netgalley, thinking I didn't know the author, and it has been one of my best hunches to date. This book was on my mind from the moment I started reading it and had to put it down for work till now.

The novel couldn't work if Fowler didn't get the haunting aspects of the plot right and thankfully he does. One of my favourite movie genres is psychological thrillers, always thrillers over horrors. Blood scattered across walls and detached limbs gross me out and make me look away, but they don't scare me deep into my soul. In movies a lot can be done visually, of course, and in a novel all this happens in your mind, making the reading experience even more intense. If a thriller is well-written, it balances on the fine line between reality and fantasy that makes you doubt everything. And doubt, in my mind, is one of the strongest emotions humans feel and it is exactly the emotion that is triggered by the dark, because we don't know what's hiding in the corners. Nyctophobia is fear of the dark (nice segue, no?) and the whole novel is infused with the play between dark and light and reality and fantasy. It's also the only phobia that can be transmitted and this novel will most definitely make you reconsider sleeping in the dark.

Fowler's story gets a lot of its strength from its originality. I can hear you thinking 'haunted house, how is that original?' but Fowler brings some innovation to the old trope which largely comes from research. I have a pretty big love for architecture although I know nothing about it and I loved how much attention there was in Nyctophobia for the haunted house and its construction. At times the characterization is a bit sketchy but it is important to remember that a lot of the narrators in these kinds of books are unreliable narrators, in the sense that their own vision of events is skewed which adds to the mystery of the book. The first half of the book was very strong, clearly setting up the story and separating itself from many of the 'haunted house' cliches, but the third quarter wasn't quite as strong. However, the ending made up for any of the slack in the previous part and I was quite happy to both have some of my suspicions confirmed and to still have some surprises waiting for me.

On a quick side note, I was quite happy with the female main character. Callie has a troubled past which she has largely conquered but by which she is still haunted. She is educated and independent, but also desperate to please. Despite having problems with her mother she manages to be a good step-mother to her husband's daughter. What I am trying to get at is that Callie is quite a multi-dimensional character, she is not just a wife alone at home or just a mother trying to protect her kids, as we unfortunately often see in thrillers. Although I didn't agree with all the choices she made, I empathized with her and was happy about her as a character.

I thought I had never read anything by Fowler before until I saw a list of his previous books at the back of the book and saw he also wrote the Bryan & May series of which I reviewed one not too long ago. I never would have guessed these two books came from the some man. On the one hand, both are "mystical" if you want to be vague about it, but Nyctophobia is very different, not only in its female protagonists and non-British setting, but also in how it moves. Fowler's writing style is much more personal and on the one hand it feels like he takes his time with developing the story but on the other hand there is a quick pace to the book that heightens the tension.

I really enjoyed Nyctophobia, it is the best thriller I have read in ages and will read for a while. The main characters are really interesting and this is a take on the 'haunted house' trope that is truly refreshing and different. It hit all the right buttons and I will most definitely be rereading it soon. I recommend this not only to thriller fans but also to people looking for a story that is completely engrossing.
Posted by Juli Rahel at 9/06/2014 11:41:00 am