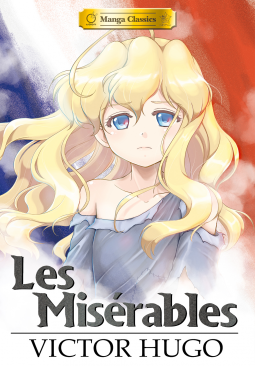 I have slowly been expanding my horizons, genre-wise, and next to comics I also decided to pick up mangas. The first one I picked up was UDON's Les Misérables and it may not have been the best decisions. I will not discuss the plot of the manga in depth, since I assume the plot of Les Misérables is relatively well-known.

Adapted for stage and screen, loved by millions, Victor Hugo's classic novel of love & tragedy during the French Revolution is reborn in this fantastic new manga edition!

The gorgeous art of TseMei Lee brings to life the tragic stories of Jean Valjean, Inspector Javert, and the beautiful Fantine, in this epic adaptation of Les Miserables!

Now, first I have to state that my reservations about this manga has, to a certain extent, nothing to do with the manga itself. Les Misérables has always been a novel about which I have had serious doubts because of Victor Hugo's writing style and because of some of the main characters. I even found the film very hard to sit through. Jean Valjean was never an interesting protagonist to me and I always hoped for Fantine to be able to do more in the narrative except suffer. UDON's version sticks close to the novel, as close as is possible when adapting such a gargantuan work into a manga. Naturally some side-plots had to be cut, as SunNeko Lee explains at the end of the book, but in many ways I think Hugo's work benefits from some trimming.

As a complete novice to manga reading, UDON's Les Misérables was quite an eye-opener. To my shame I have to admit I started reading it at the "wrong" side of the manga, i.e. the side that Western books are read, from left to right. After two pages I realised my error because starting with a flashforward to the very end doesn't make any sense and I restarted, properly this time. I am extremely happy UDON decided to stick with the way mangas are classically written, because by combining something as European as Les Misérables with Asian elements shows that there is absolutely no problem in putting the two together. The medium fits the story as well as any other and that is a really important thing to realize. TseMei Lee's illustrations were also beautiful, even though I have to admit that manga-style might not be entirely my thing. The art really matched the story and caught some of the aspects of the story beautifully.

I quite enjoyed SunNeko Lee's adaptation of the writing. Naturally a lot of Hugo's prose had to be scaled back to fit into the frames but Lee preserved a lot of the momentum that his style has. And by being able to cut out a lot of the description, which TseMei Lee picks up in her illustrations, the narrative flows a lot easier than it does in the novel. Once again, the scenes around the barricade were my favourites and I was pleased to see that they chose to show, rather than tell in some instances. Again Eponine was one of the most tragic characters although I wish her motives and personality were allowed to shine a bit more.

I give this manga...

Overall I enjoyed reading UDON's Les Misérables despite not being a big fan of the original story. I appreciated how the medium changed the way the story was told, but I'm not entirely convinced yet that mangas are something for me. I would definitely recommend Victor Hugo and Les Misérables fans to check this edition out, but I'd also suggest it to anyone wanting to branch out from their usual reading.
Posted by Juli Rahel at 9/09/2014 12:17:00 pm