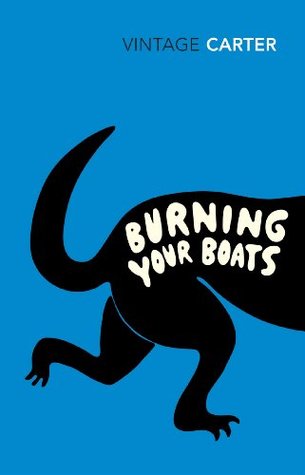 I have been slightly absent because I've realized that family engagements, travelling and three full working days together in one week make for a severe lack of time for blogging and reading. But hopefully by next week I'll have settled in a little bit! This week I'm using Angela Carter's short story collection, a bit of a Best Of collection, Burning Your Boats.


WITH AN INTRODUCTION BY SALMAN RUSHDIE.

As well as her eight novels, Angela Carter published four wonderful collections of short stories during her lifetime, and contributed stories to several anthologies. The stories were scattered amongst different publishers, and a couple of the volumes are now out of print. In Burning your Boats they are gathered for the first time; this is a key collection and a major event for Angela Carter aficionados.

Book Beginnings is hosted by Gillion over at Rose City Reader and Friday 56 by Freda at Freda's Voice.

BB: (from 'The Man Who Loved a Double Bass)


'All artists, they say, are a little mad. This madness is, to a certain extent, a self-created myth designed to keep the generality away from the phenomenally close-knit creative community. Yet, in the world of the artists, the consciously eccentric are always respectful ad admiring of those who have the courage to be genuinely a little mad.' p.1

I loved this opening. When I first picked up the book on a book fair, I closed it and paid for it after reading that opening line. I had read one or two Angela Carter stories before, but this just settled it for me. After this collection I have become a life-long fan!


'Sometimes the lights of the midnight riders scrawl brilliant hieroglyphs across the panes, especially on moonless nights, when I am alone in a landscape of extraordinary darkness, and I am a little frightened when I see their headlamps and hear their rasping engines for then they seem the spawn of the negated light and to have driven straight out of the sea, which is just as mysterious as the night, even, and also its perfect image, for the sea is an inversion of the known and occupies half, or more, of the world, just as night does; whilst different people also live in the countries of night.' p.56

Yup, this is all one magnificent sentence. I love Carter's writing style, it is simply so 'there', by which I mean that she herself always seems to be part of her writing and therefore it holds such determination to carry on for lines and lines.

So, that was me for the day! What are you sharing?