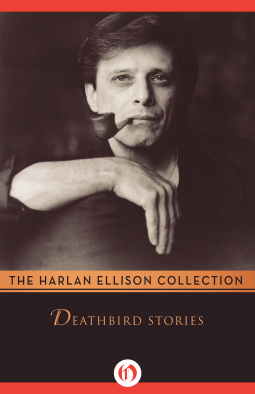 It is officially a week until I get my final University grades back! It is extremely terrifying but on the other hand I'm also quite looking forward to it! This week I'm sharing a book with you which I only just got accepted for although it's been out for a year. I'm talking about Deathbird Stories by Harlan Ellison.


“Men rarely (if ever) manage to dream up a god superior to themselves. Most gods have the manners and morals of a spoiled child.” —Robert Heinlein, 1973

A masterwork of myth and terror, Deathbird Stories collects nineteen of Harlan Ellison's best stories written over the course of a decade. In it, ancient gods fade as modern society creates new deities to worship—gods of technology, drugs, gambling. Revolutionary when first published, the short stories contained here have won multiple honors, including the prestigious Hugo and British Science Fiction Awards. They have inspired a generation of readers and other authors to reexamine blind faith and fight against crumbling institutions. Stark and often angry, this collection strips away convention and hypocrisy and lays bare the human condition. After all, the gods we invent contain all too much of their inventors.

Book Beginnings and Friday 56 are hosted by Gilion at Rose City Reader and Freda at Freda's Voice respectively.

'Gods can do anything. They fear nothing: they are gods. But there is one rule, one Seal of Solomon that can confound a god, and to which all gods pay service, to the letter:When belief in a god dies, the god dies.When the last acolyte renounces his faith and turns to another deity, the god ceases to be.' p.5

I love this beginning! Talk of gods is always good because I love religion, culture and society! I'm wondering where Ellison will go from here. This quote is from the foreword called Oblations at Alien Altars.


'There in the fetid closeness of a shop whose dimensions were lost in dusk, the old Mexican said Niven was a man without belief, without faith, without trust, and so was damned; a man doomed and forsaken. He said all the dark and tongueless things Niven had never been able to say himself.' p.56

Oh God, I didn't realize how much I would love Ellison's writing style and now I basically want to start reading it straight away and ignore everything else I'm supposed to do.