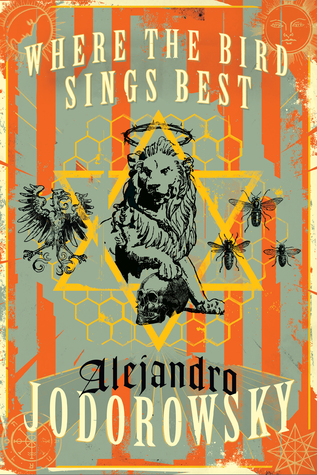 This Tuesday I'm using a book which as been calling my name for a long time now and somehow haven't gotten round to. So I'm trying to tease myself as much as you right now. Hope that makes up for the merciless teasing!


In this wildly imaginative, powerfully moving, “psychomagical” autobiography, legendary filmmaker Alejandro Jodorowsky tells the story of how his Russian Jewish grandfather (also named Alejandro), his fiery wife, Teresa, and their four children moved to Chile under fake passports and assumed Christian identities, with only a half-kopek to their name, and no idea how they’d forge their new lives.

The book is a visionary family saga filled with ancestors both mythical and real—including relatives always covered in bees, women who commune with wolves, snake charmers, and militant anarchists. Where the Bird Sings Best owes its title to Jean Cocteau’s reflection: “A bird sings best on its family tree.” Drawing on history, ancestral legends, and intimate family stories, in this memoir Jodorowsky brings to bear the same unique storytelling genius he has brought to his iconic films El Topo, The Holy Mountain, and The Dance of Reality in this deeply personal search for his roots.

Tuesday Intros and Teaser Tuesdays are hosted by Diane over at Bibliophile by the Sea and MizB over at Should Be Reading. These quotes are from an advanced reading copy and may therefore differ from the final, published novel.

BB (from the Prologue):


'All characters, places, and events are real - though from time to time the chronological order is altered. But this reality is transformed and magnified until it achieves the status of myth. Our genealogical tree is the trap that limits our thoughts, emotions, desires, and material life, but it is also the treasure that captures the greater part of our values. Aside from being a novel, this book may, if it is successful, serve as an example that all readers can follow and, if they exercise forgiveness, transform family memory into heroic legend.' p.1

I'm all for turning family memory into heroic legend because everything that happened in the past fascinates me. I like this beginning because Jodorowsky draws you in by maintaining the reality of what he is describing while also allowing for some narrational magic to seep in.


'"I've lost her. And now that she's not here, I finally know how much I loved her. I'll feel her absence or the rest of my life. I love the empty space she's left, where she is missing is now my place. The light is gone."'  p.113

I was considering not using this teaser because it technically could be a spoiler but then, we have no clue who is talking here about whom, so I feel like there is plenty of suspense left. And isn't this prose just absolutely stunning?

Does Where the Bird Sings Best sound like your kind of book? Or are family sagas not really your thing?