Friday Memes and the 'Idols of Perversity' by Bram Dijkstra

Why is it almost March? I mean, how did this happen? 2015 Only just started and now we're in the 3rd month, which would mean we're about to finish the first quarter of this year... Anyway, let's move on with the memes! Follow Friday is hosted by Alison Can Read and Parajunkee. This week's question was suggested by Alison herself:

Your house is burning down and you have time to select three books you own to take with you. What three books?

Noooo! This is a dreadful question, because how do you actually choose? I don't have children but I'd imagine it would be like choosing between them! I could chicken out and say I have a Kindle and therefore would just bring that one. However, I have decided to come to a decision. I would bring The Master And Margarita by Bulgakov, Wuthering Heights by Emily Bronte and Beowulf: A New Translation

by an anonymous poet and Seamus Heaney. That way I'd have a bit of a range of different styles and genres and I'd be fine until I got myself a new house with bookshelves to fill!

Book Beginnings is hosted by Gilion over at Rose City Reader and Friday 56 by Freda over at Freda's Voice. Last week I took out an absolutely brilliant book from the library, which has made me slightly despair at the representations of women in art during the last three centuries. So far I have only worked my through the eighteenth century but there have already been so many realizations on my end that I will definitely keep going. This book is Bram Dijkstra's Idols of Perversity: Fantasies of Feminine Evil in Fin-de-Siecle Culture. Long title, but absolutely fascinating. 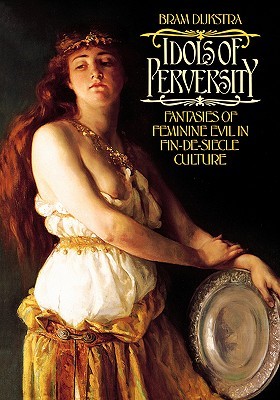 At the turn of the century, an unprecedented attack on women erupted in virtually every aspect of culture: literary, artistic, scientific, and philosophic. Throughout Europe and America, artists and intellectuals banded together to portray women as static and unindividuated beings who functioned solely in a sexual and reproductive capacity, thus formulating many of the anti-feminine platitudes that today still constrain women's potential.

Bram Dijkstra's Idols of Perversity explores the nature and development of turn-of-the-century misogyny in the works of hundreds of writers, artists, and scientists, including Zola, Strindberg, Wedekind, Henry James, Rossetti, Renoir, Moreau, Klimt, Darwin, and Spencer. Dijkstra demonstrates that the most prejudicial aspects of Evolutionary Theory helped to justify this wave of anti-feminine sentiment. The theory claimed that the female of the species could not participate in the great evolutionary process that would guide the intellectual male to his ultimate, predestined role as a disembodied spiritual essence. Darwinists argued that women hindered this process by their willingness to lure men back to a sham paradise of erotic materialism. To protect the male's continued evolution, artists and intellectuals produced a flood of pseudo-scientific tracts, novels, and paintings which warned the world's males of the evils lying beneath the surface elegance of woman's tempting skin.

Reproducing hundreds of pictures from the period and including in-depth discussions of such key works as Dracula and Venus in Furs, this fascinating book not only exposes the crucial links between misogyny then and now, but also connects it to the racism and anti-semitism that led to catastrophic genocidal delusions in the first half of the twentieth century. Crossing the conventional boundaries of art history, sociology, the history of scientific theory, and literary analysis, Dijkstra unveils a startling view of a grim and largely one-sided war on women still being fought today.

I know, it sounds a bit heavy, but it is worth it!


'Her eyes glazed with the terror of understanding. The pallor of sudden knowledge has settled on her face. A paralyzing consciousness of her entrapment has turned her body into a wedge of fear. Wracked by a dark foreboding, she pits the force of newborn moral responsibility against the soul-destructive lure of the senses. ... William Holman Hunt undoubtedly meant to shock his female viewers into virtuous conformity by means of this painted melodrama of sin and sudden recognition titled 'The Awakening Conscience'.' p.1

I decided to skip part of Dijkstra's description of the painting in order to show you how he uses his detailed analysis to support his arguments. The F56 is one which, when I read it,


'The artist's conception is full of power and originality. Its whole force is centered in the pathetic dignity of the outstretched figure, so beautiful in its helplessness and pure serenity, so affecting in its forlorn and wintry shroud, so noble in the grace and strength of its presentment. The tone of the dark, almost livid flesh is finely realized, and the drawing of the foreshortened figure displays masterly skill; the disposition of the body and the curved of the lower limbs are circumstances of real subtlety of design in this beautiful composition.' p.56

The 19th century culture cultivated the idea of weak, diseased and dead women as beautiful, because it showed their submission to men and the patriarchy at its fullest. Anorexia also blossomed around this time, to allow women to look as weak and ill as possible. When I look at the painting I see a young woman exposed and violated, rather than something to aspire to.

Sorry to end the post on such a down-note, but I think Idols of Perversity is a really important book! What are you reading atm? And which books would you safe from a house-fire?
Posted by Juli Rahel at 2/27/2015 12:40:00 am