Review: 'The Republic of Užupis' by Haïlji, Bruce and Ju-Chan Fulton 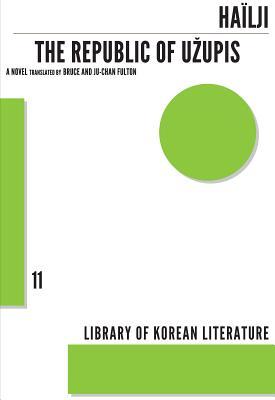 I try to read as much foreign literature as possible and yet there are many countries from which I haven't read anything. The Republic of Užupis is my first foray into Korean literature and I definitely will be continuing my exploration after such a promising start.


žUžupis ("on the other side of the river") is, in reality, a neighborhood in Lithuania's capital city of Vilnius, which took the peculiar step of declaring itself an independent republic in 1997. In this novel, however, it is the lost homeland of a middle-aged man named Hal, who lands in Lithuania hoping to travel back to the town of his birth in order to bury his father's ashes there -- in a place that might not really exist. In a literary tradition dominated by social realism, The Republic of Užupis is a unique work of melancholy, Murakami-esque whimsy.

The Republic of Užupis is a fascinating novel. Although Goodreads calls it 'Murakami-esque', it reminded me a lot of Kafka and his convoluted narratives in which men go through the strangest experiences, surrounded by people who are at once understanding and rejecting. From the get go Haïlji twists your expectations by setting this novel in Lithuania rather than in Korea. As a Western reader this meant that the setting was both familiar and yet also strangely disconcerting. Haïlji demands for you to pay attention on each page, keep track of what happens and to whom because the story will otherwise make no sense. I enjoy these kinds of reads, where reading is, in some ways, a challenge because what you get out of the book is hard won and therefore feels more precious. Haïlji's narrative is one which constantly twists about and runs in circles. On the one hand it feels as if everything that happens is slightly familiar and yet every new twist is surprising and fascinating. None of the characters seems aware of what is happening and this brings realism to a narrative which is otherwise utterly absurd.

The author stirred controversy in Korea with his Racetrack-novels through the way in which he deals with the contradictions in life and this is something he also does in The Republic of Užupis. He offsets characters and situations against each other which seem utterly ridiculous and yet the reader can't help but feel that if the novel were narrated by one of the other characters their actions would make sense. A big theme throughout the whole novel is the idea of home and missing something that is impossible to find. When do you give up and stop hunting after something everyone tells you doesn't exist? As Han continues on his mad search for Užupis and the reader becomes more desperate to find out what the truth is, Haïlji makes it clear that maybe the truth doesn't matter. Is what Han believes to be true not more important than the actual truth? The Republic of Užupis is bound to leave you with a whole range of interesting questions and conversation starters. It might also make you want to visit Lithuania. I know I'm desperate for a hike through its snowy hills now.

This translation is from the Library of Korean Literature series — a joint venture between the Dalkey Archive Press and the Literature Translation Institute of Korea. Bruce and Ju-Chan Fulton do an amazing job at translating Haïlji's intricate fiction. There is no difficulty in their writing and the understanding of the story for a non-Korean. Haïlji's story feels nation- and time-less, as if it could happen everywhere at any point in history, present or future. The novel's strength, then, lies in exactly this. Han's search for his long lost country becomes personal to the reader and Han and Haïlji show that language and borders form no barriers for someone desperate to return home.

Haïlji's The Republic of Užupis is a singular book. By this I mean that I have read nothing like it before. Whereas Kafka's fiction is absurd to the extent that his characters can hardly be identified with, Haïlji infuses his characters with so much realism that the reader can't help but curse our strange world for dooming them so. I recommend this novel to anyone looking for a challenging and fun read. The Republic of Užupis is short, but it will stay with you for a long time.
Posted by Juli Rahel at 2/18/2015 09:56:00 am