I'm loving all the sun that is currently blessing England with its presence, although apparently it won't last. Damn you, clouds from Scotland! Anyways, let's get on with these memes, the first of which actually has to do with the weather. Follow Friday is hosted by Alison Can Read and Parajunkee and the question is:


Spring is in the air! Show off your favorite outdoors reading spot. If you don't go outside...well where else do you read that isn't inside your house? We want pics!

Can't believe this question comes up on the day that I have abandoned where I live for London! Now I can't take any of the pictures. I have had to resort to Google to find pictures of my university so they're a bit fancy but oh well. The picture below is a photo of the park that is on my Uni campus. There is a lake, there is a tiny island with trees and benches, there is a walk around etc. The big building in the middle is one of the campus buildings that has a surprising amount of places to eat such as a Salad Bar, a Chinese and even a Chicago Pizza place. I love reading in the park, because it is just so nice and relatively quiet, except for the occasional sports societies running around on their jogging trips, which I honestly can't complain about. Other places where I have really enjoyed reading this year is at the Starbucks in town. 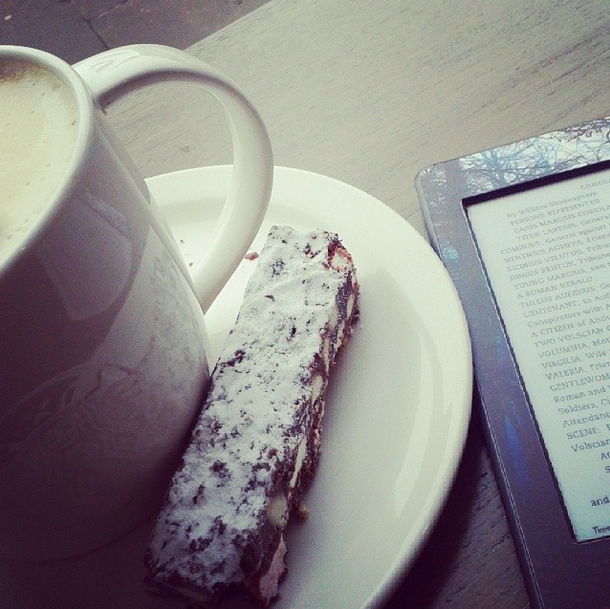 Yes, this picture is shamelessly stolen from my own Instagram and I have no idea which filter this is, but hopefully you can see the benefits of reading at Starbucks: a large Latte and a Rocky Road! I managed to read All Quiet on the Western Front and The Plague in Starbucks!

Book Beginnings and Friday 56 are hosted by Rose City Reader and Freda's Voice respectively. This week I am using Hyde by Daniel Levine.

A reimagining of The Strange Case of Dr. Jekyll and Mr. Hyde from the monster's perspective, Hyde makes a hero of a villain. As a bonus, Stevenson's original novel is included at the back. Mr. Hyde is hiding, trapped in Dr. Jekyll's surgical cabinet, counting the hours until capture. As four days pass, he has the chance, finally, to tell the story of his brief, marvelous life.

'Henry Jekyll is dead.I whisper the words and then listen, as if I've dropped a stone into a well and await the plunk and splash...But inside my head there is only silence.' p.1

It seems to be a rather definite beginning and shouldn't be a spoiler if you've read the original The Strange Case of Dr. Jekyll & Mr. Hyde. But I'm reading the book right now and it is slowly turning out not to be as simple as the beginning makes it out to be. I am really starting to feel sorry for Hyde, to be honest.


'The Gullet was the proper name. The  place was dark and narrow and at the back fell down a steep staircase to a basement room.' p.56

I love the descriptiveness of this book so far. Levine is really managing to paint a picture of the city and his characters in such a way that he sticks with the dark tone of his book and the original, yet infuses them with life.


If you have the time, I'd love for you to stop by my "tour" of the amazing website Forgotten Books!