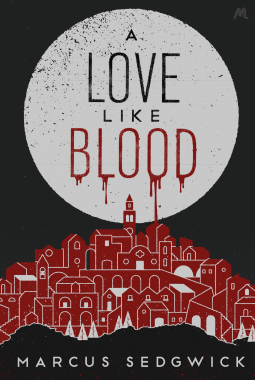 I don't know what I was expecting from this novel, but the strange obsession and fascination that I felt for it while reading it is definitely not it. I was attracted by the cover, mainly, and on Netgalley it stated that this was Sedgwick's first adult novel after a row of YA novels. I wondered how the transition would work.


'I've chased him for over twenty years, and across countless miles, and though often I was running, there have been many times when I could do nothing but sit and wait. Now I am only desperate for it to be finished.'

In 1944, just days after the liberation of Paris, Charles Jackson sees something horrific: a man, apparently drinking the blood of a murdered woman. Terrified, he does nothing, telling himself afterwards that worse things happen in wars.

Seven years later he returns to the city - and sees the same man dining in the company of a fascinating young woman. When they leave the restaurant, Charles decides to follow...A Love Like Blood is a dark, compelling thriller about how a man's life can change in a moment; about where the desire for truth - and for revenge - can lead; about love and fear and hatred. And it is also about the question of blood

Compelling is probably the key word when thinking about this novel. There is something absolutely fascinating about it that is at the same time repelling and yet you can't put it down. Much of that strange fascination probably has to do with how the main character responds. You can't help but follow Charles Jackson through the first part of the novel and share in his bewilderment, both at the cruelty of the war and what he witnesses in Paris. The seeming calm that enters his life afterwards made it initially hard for me to identify with Charles, largely because he seemed to become a very lethargic character. In retrospect, it is clear that Sedgwick made him thus in order to be able to rouse him into action later on. This action comes in the form of Marian, a woman who pulls him even deeper into the mystery surrounding what happened during the War.

Here is where I feel I should compliment Sedgwick on the transformation from YA to adult novel writer. Although I have never read his YA novels and therefore can't judge them, in general YA novels are very heavy on the star-crossed, for now and forever, teenage love which strips most narratives of any kind of credibility or grit. In A Love Like Blood, Sedgwick makes his character's feelings for Marian and others part of his motivation, rather than his goal. What I mean by that is that Charles Jackson doesn't act a certain way in order to achieve love or because of love, but rather that he makes the love he does or doesn't feel work in his advantage. Considering this novel deals with vampirism, another big YA favourite, I definitely had some (negative) preconceptions when I started this novel. There is only so many stories you can read about them before you're convinced you've read them all. A Love Like Blood completely surprised me. The narrative is not what you expect. It is darker, lacks the romance and somehow infuses a sense of realism into something that deals with something so absurd as vampirism.

Segdwick's descriptions of locations greatly added to the mood of the novel. 20th century Paris sounds fascinating, whereas Avignon sounds terrifying. The relative calm of Cambridge is juxtaposed with the vibrant yet dangerous London. These contrasts work together in forming a changing and moving world in which Charles has to manoeuvre between the world of academics and a world in which vampires and back alleys seem more common. Although I wanted to read the novel and read it compulsively, I don't know how much I enjoyed it. This is quite a difficult question because you don't always enjoy reads that you do appreciate and think of as good. While reading Goat Mountain by David Vann, I didn't enjoy it because it seemed too terrible, too real. Afterwards, however, I felt that I had gone on a journey and that arriving at the end of it I felt I had learned something and was the better for it. When I finished this novel, I appreciated it but I didn't feel changed by it.

At times I am too nice in my "grading" because I prefer to reward good things than look at points to improve. The reason I gave this novel 3 Universes is because it was good, but not amazing. It was a good read, funny at times, dramatic and shocking at others, but at times I missed the wow-factor, the moment where I would be blown away. The ending was probably be intended to make me sit back and gasp, but I saw it coming and therefore it didn't work on me. But I do recommend it as an interesting read!
Posted by Juli Rahel at 3/25/2014 11:18:00 pm