Review: 'Bryant & May - The Bleeding Heart' by Christopher Fowler 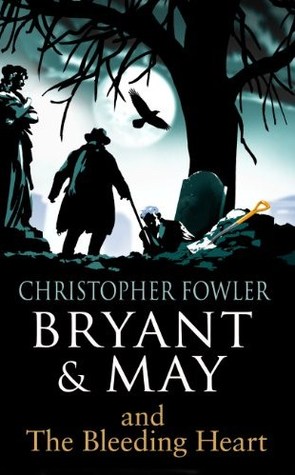 When I was around fourteen I went through an intense phase of loving detective and crime fiction. I practically devoured Elizabeth George's novels and loved the thrill of being terrified by the bad guys and saved by the good ones. This fascination waned off as I focused more on literary fiction but every now and then I still pick one up to entertain myself and see whether I'm still up to figuring out who the bad guy is before the end. This was definitely an enjoyable, if very different, detective read.

Their first case involves two teenagers who see a dead man rising from his grave in a London park. And if that's not alarming enough, one of them is killed in a hit and run accident. Stranger still, in the moments between when he was last seen alive and found dead on the pavement, someone has changed his shirt...

Much to his frustration, Arthur Bryant is not allowed to investigate. Instead, he has been tasked with finding out how someone could have stolen the ravens from the Tower of London. All seven birds have vanished from one of the most secure fortresses in the city. And, as the legend has it, when the ravens leave, the nation falls.

Soon it seems death is all around and Bryant and May must confront a group of latter-day bodysnatchers, explore an eerie funeral parlour and unearth the gruesome legend of Bleeding Heart Yard. More graves are desecrated, further deaths occur, and the symbol of the Bleeding Heart seems to turn up everywhere - it's even discovered hidden in the PCU's offices. And when Bryant is blindfolded and taken to the headquarters of a secret society, he realises that this case is more complex than even he had imagined, and that everyone is hiding something. The Grim Reaper walks abroad and seems to be stalking him, playing on his fears of premature burial.

Rich in strange characters and steeped in London's true history, this is Bryant & May's most peculiar and disturbing case of all.

I had never heard of the Bryant & May series, but apparently The Bleeding Heart is the 11th book in the series. A problem with reading a book from halfway through a series is that a lot of the character development already happened. I touched upon this in my review of The Dead in Their Vaulted Arches by Alan Bradley. In the case of this book, it made it quite hard to get into the book at the beginning because all of the characters were showing traits that normally would have been explained or introduced but were here assumed familiar. An unexpected bonus of this, though, was that you got to see the characters as "they really are". The only way I can explain this is by example. When you're introduced to a new group where the others already know each other really well you learn much more about the people by observing how they treat old friends rather than by experiencing how they treat a stranger. Similarly, all the characters were acting "naturally", which endeared them to me. I loved the interaction between all the characters, the way they bickered, the way they came together, etc. In detective novels, and TV series, there is a set of stock characters which always pop up. There is the tough female cop, the old and strange cop who is full of wisdom, a boss pushing for results, etc. In The Bleeding Heart I feel all of these characters did appear but were given something of their own.

I really enjoyed the plot of this book. Detective books can be quite similar in the way they're set up because at the beginning a crime happens that will be solved by the end of the story. But the chemistry between the characters and their unique outlook on investigating gave the rather stereotypical narrative a surprising and fun angle. Rather than focusing on the high-end computers that can identify finger-prints in a matter of seconds, Bryant's & May's team seem to do their policing in an old school way. I loved the way that the novel worked its way from informal meetings to non-approved property searches and back to the most chaotic office ever to be described. It gave the book a feel of homeliness and reality that many other detective books miss. While reading it, there was a sense that the reader could be involved in this himself, whereas a lot of detective stories are so detailed and abstract that I comfortably sit back in the knowledge I'll never be chased over the Alaskan highlands by a pen knife wielding maniac who has been stalking me and my family for the last decades. Something I also majorly enjoyed was the descriptions of London. I myself lived in London for a while and I recognized many of different places and streets down which they ran. Sometimes, when a book is set in a city you know you find yourself wondering whether the author has been there himself/herself because they don't seem to get the feel of the city right. Fowler describes London perfectly. It is both vibrant and new, but also has its dark nooks and corners in which gang culture is rife and the strangest characters pop up.

It was also genuinely nice to see how all of the different narrative strands came together. The graverobbers, the hit and run, the birds, all of it somehow comes together but not until the last two or three chapters. At some point I was wondering whether Fowler would be able to bring it together in a satisfactory way, but about three-quarters in I started suspecting who the suspect may be and I have to say I was very satisfied with how the end came about. There were plot twists I didn't see coming, some of which, however, didn't really shock me either. And this is where the only flaw in the novel should be discussed. Although I enjoyed it, I wasn't very involved with the book. It seemed to tick all the boxes; identifiable characters, interesting plot line, amazing setting, etc. but something just left me slightly cold. Perhaps the reason is that I started well into the series or maybe it is because the main characters are both relatively old men, but I didn't really connect with the book.

I doubted for a bit whether to give it 2 or 3 Universes out of 5, but eventually went for 3 because I would recommend this book. It is a fun read for on the side, full of little bits of legends and stories, but if you're looking for an intense crime read that will sweep you away, this is not it.
Posted by Juli Rahel at 3/27/2014 12:44:00 pm