Review: 'The Dead in Their Vaulted Arches' by Alan Bradley 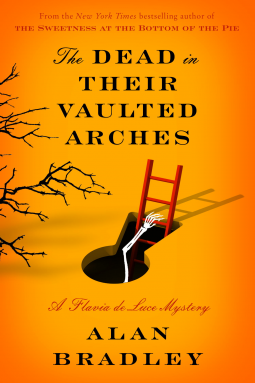 I picked this book almost on random and completely unaware that it was part of a series. What intrigued me was the idea of this eleven-year old girl who uses chemistry to figure out crimes. I myself, although even below the novice level, love chemistry and the things it can tell so I was very interested.

On a spring morning in 1951, eleven-year-old chemist and aspiring detective Flavia de Luce gathers with her family at the railway station, awaiting the return of her long-lost mother, Harriet. Yet upon the train’s arrival in the English village of Bishop’s Lacey, Flavia is approached by a tall stranger who whispers a cryptic message into her ear. Moments later, he is dead, mysteriously pushed under the train by someone in the crowd. Who was this man, what did his words mean, and why were they intended for Flavia? Back home at Buckshaw, the de Luces’ crumbling estate, Flavia puts her sleuthing skills to the test. Following a trail of clues sparked by the discovery of a reel of film stashed away in the attic, she unravels the deepest secrets of the de Luce clan, involving none other than Winston Churchill himself. Surrounded by family, friends, and a famous pathologist from the Home Office—and making spectacular use of Harriet’s beloved Gypsy Moth plane, Blithe Spirit—Flavia will do anything, even take to the skies, to land a killer.


I absolutely loved Flavia! She was so much fun to read as a character because despite being an incredibly intelligent eleven-year old, she is still an eleven-year old and I really liked that. In a  lot of modern YA fiction, I feel like authors forget the age of their characters. They have sixteen-year teenagers declaring undying and passionate love to each other, forgetting that in real life no one would take them seriously. I was incredibly pleased that romance is something that hardly infiltrates Flavia's world. Bradley really paid attention to keeping her mind and thoughts as close to as they possibly would be, while managing to keep me surprised at every turn. This would also be the moment where I express how much I loved the family-relationships in this book. The three sisters reminded me of my sister and me, the secret codes, the slight jealousy that exists between all sisters and the sudden realisations about how much they loved each other. Bradley really nailed this chemistry. The figure of their father is also very well sketched and his grief and how it is described in this book is beautiful.

As I said above, I didn't know this was part of a series, although the tagline 'A Flavia de Luce Mystery' possibly should have given it away. Occasionally it can be difficult to get into a series when the character-development is already underway because you can't appreciate where a character is coming from. Although I clearly missed some of the initial exposition, within the book I got both an idea of where Flavia came from and where she could be heading. Another aspect of reading a book in a series is that some of the plot development is also left for later. For example, I would have appreciated a little bit more explanation at the end of the book because I felt that Flavia herself might need more explanation. But I'm expecting most of that will happen in the next books. I really enjoyed Bradley's writing style. It flows very easily and manages to infuse life both into deeply emotional moments and "action" sequences. There is some mystery and tension, but there is also moments of quiet, all of which work with each other beautifully. The descriptions of Flavia's home really help to set the scenes.

I was thinking about giving it three and a half Universes but since that doesn't exist I decided to round it up to four. The biggest compliment I could perhaps give this book is that I definitely want to read the rest of the series. Flavia is a delightful character that has an enormous amount to offer to every single reader. I can't wait to see how this relationship develops. I recommend this novel to everyone who enjoys a light mystery with a lot of potential.
Posted by Juli Rahel at 3/19/2014 03:44:00 pm