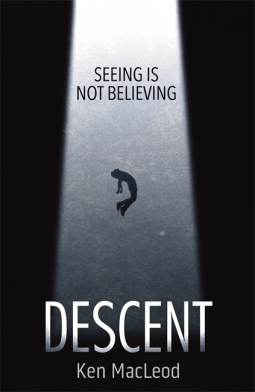 I am and always will be very skeptical of any kind of conspiracy theories, not because I am a naturally trusting person, but because I do not see the government's gain in any of them. I picked this book on Netgalley because I thought it might be different and interesting to read about something I usually stayed away from. And boy, was I right.


HOW FAR WOULD YOU GO FOR THE TRUTH? Ball lightning. Weather balloons. Secret military aircraft. Ryan knows all the justifications for UFO sightings. But when something falls out of the sky on the hills near his small Scottish town, he finds his cynicism can't identify or explain the phenomenon. And in a future where nothing is a secret, where everything is recorded on CCTV or reported online, why can he find no evidence of the UFO, nor anything to shed light on what occurred? Is it the political revolutionaries, is it the government or is it aliens themselves who are creating the cover-up? Or does the very idea of a cover-up hide the biggest secret of all?

I truly enjoyed this book. It has been very different from any of my other recent reads, which means it was always refreshing to continue reading it. Being set in out future, many of the things MacLeod describes are very familiar, which makes it easier for the reader to sink into the story and identify with the main character. He manages, however, to twist many of our expectations around and does so in a very off-hand manner that is at times unsettling but always works. An example would be the technology with which he fills the novel. On the one hand the reader recognizes all of it and on the other hand it has been given a twist that makes you look at what you use it for in a completely different way. As such, the book manages to be a critique of our current society while looking at a future one. Whether this means it can be classed as a dystopian novel in the lines of 1948 etc. I do not know.

MacLeod's reading style is both easy and complex at the same time. You never feel alienated while reading, despite the book being set in a completely different world, because so many of the manners and characteristics of the characters are incredibly human. Each of the characters has something identifiable that will strike a chord and will remind you of someone you know. For a book which's central theme is UFO's and alien abduction, this is quite a feat. I won't go into the conspiracy theory too much because mentioning any part of it would spoil both the fun of finding out yourself and of MacLeod's build-up to each realization. What I will say is that MacLeod manages to not ridicule conspiracy theorists but show how circumstance adds to each experience and how sometimes a crazy conclusion may seem like the right one.

MacLeod must have done an enormous amount of research, considering how technical and scientific some of the passages in this book are. Being an English student, I don't know how much of it is correct, but the book seems to be settles deeply in the academic sphere. For a reader like me, who is interested in current world issues and developments in science and technology, it was fascinating to read how MacLeod adapts modern day problems and invents solutions to them. It does, however, at some moments, seem to clod up the narrative and filling it with too much information to be relevant. However, this might have been a conscious choice on MacLeod's part. Many of the social issues we face today are also discussed, either through problems Ryan has to live through, such as a childhood of deprivation, or in a more general way, how he discusses the issues around race and gender.

I would recommend this book to those people who enjoy a good UFO story but want some intelligence added to the mix as well. This book is a fascinating view into how society does and could work and how many things aren't as they seem. A warning does go with picking this book up: there is a lot of information thrown at you, not all of which may seem necessary, but it does add to the flavour of the book.