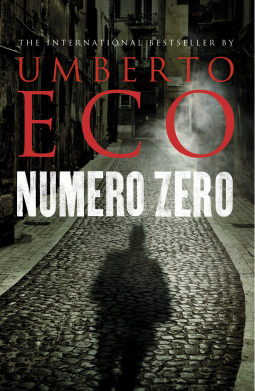 Eco is a master storyteller. Whether it's his The Name of the Rose or Foucault's Pendulum, Eco has proven that he can weave a story which is fascinating and beautifully told from beginning to end. What makes him so special as well is his in depth knowledge about the subjects he writes about, especially the Middle Ages. So when I saw Eco's new book pop up on Netgalley I knew I wanted to get my hands on it. Thanks to Netgalley and Harvill Secker for providing me with a copy of this book in exchange for an honest review.


1945, Lake Como. Mussolini and his mistress are captured and shot by local partisans. The precise circumstances of Il Duce’s death remain shrouded in confusion and controversy.

1992, Milan. Colonna, a depressed hack writer, is offered a fee he can’t refuse to ghost-write a memoir. His subject: a fledgling newspaper financed by a powerful media magnate. As Colonna gets to know the team, he learns the paranoid theories of Braggadocio, who is convinced that Mussolini’s corpse was a body-double and part of a wider Fascist plot. It’s the scoop he desperately needs. The evidence? He’s working on it.Colonna is sceptical. But when a body is found, stabbed to death in a back alley, and the paper is shut down, even he is jolted out of his complacency.

Fuelled by conspiracy theories, Mafiosi, love, corruption and murder, Numero Zero reverberates with the clash of forces that have shaped Italy since the Second World War. This gripping novel from the author of The Name of the Rose is told with all the power of a master storyteller.

The great thing about reading books by authors from different parts of the world is that you can't help but learn something about different cultures, histories and languages. As a European it's impossible to avoid learning about the Second Worl War (if that would even be something people want), but that doesn't mean you'll know all the intricacies. Italy dealt with its own Facist government during that time in world history and the name Benito Mussolini should be familiar to most, but since it's not my own history I'm not as in touch with it as with my own history. So it was fascinating reading Numero Zero and seeing an Italian work with his own history so intensely and interestingly.

Conspiracy theories can be a lot of fun but they can also be very dangerous. Nunero Zero works with both of those aspects. Braggadocio, who's name should be a hint as to his character, is beautiful in his madness and suspicions. He goes of on major rants, mentions dozens of people ranging from obscure to famous, and is at times almost understandable. Since Numero Zero is most likely Eco's shortest, ringing in at less than 200 pages, the book is consequently quite dense and the pace is rather intense. With the amount of information and knowledge that Eco put into this book, it might have been better to allow for some more time. Then, on the other hand, the way the book sets itself up as a crime and thriller novel, the high pace definitely helps to set the mood. In the end there might be some storylines that don't feel like they've been concluded properly.

The size of some of his previous books have out readers off Eco who would've otherwise loved his wit and sarcasm. In the case of Numero Zero the media is what suffers most of his ire, but usually in a playful way. Everyone working at the newspaper is taken from a stereotype and is used to drive home a point. Nothing is made more obvious, however, than the terrible work sexism that the only female character, Maia, suffers. Although personally I might feel that Eco isn't critical enough of this, the constant presence of it is enough to show the reader that even its main character can't seem to let go of this attitude. Maia remains the most capable character throughout though, especially when Colonna himself becomes unreliable.

I did really enjoy reading Numero Zero but it was almost a little too fast and dense to make for a comfortable read. It wasn't necessarily as engrossing as some of Eco's other books were but it is very enjoyable. If you love conspiracy theories, fast-paced thrillers and history, Numero Zero is your book!
Posted by Juli Rahel at 11/30/2015 10:16:00 am