Friday Memes and 'Of Things Gone Astray' by Janina Matthewson 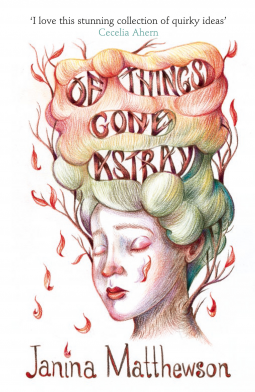 I have a bad habit of getting really excited by books and then getting distracted. It's not good and I'm working on it. Of Things Gone Astray is the kind of book that I was really excited about and wanted to get started with straight away. Then life happened and now I'm finally starting it. And just look at that cover, isn't it stunning? This is Of Things Gone Astray by Janina Matthewson.

On a seemingly normal morning in London, a group of people all lose something dear to them, something dear but peculiar: the front of their house, their piano keys, their sense of direction, their place of work.

Meanwhile, Jake, a young boy whose father brings him to London following his mother’s sudden death in an earthquake, finds himself strangely attracted to other people’s lost things. But little does he realise that his most valuable possession is slipping away from him.

Of Things Gone Astray is a magical fable about modern life and values. Perfect for fans of Andrew Kaufman and Cecelia Ahern.


'Mrs. Featherby.
Mrs. Featherby had been having pleasant dreams until she woke to discover the front of her house had vanished overnight.
They had been dreams of when she was younger and more energetic, dreams of a time when she had full use of her knees. She had saved someone in one of them, someone helpless, she thought, but once awake she couldn't remember who or why or what had happened next.' 1%

I like the beginning because the first line is just so beautifully ridiculous, but then Matthewson just moves on. I like it when books have absurdness in them but don't go 'Oh my God, we're being so edgt and abstract, look at us'. Basically I really wish I'd started this sooner!


'"OK, number one, princess, we stopped believing in the loves of our lives when we were seventeen; number two, I didn't not like her, I just thought you were too much of a different person because of her; and number three, I'm allowed to be blasé about your having lost her if you're going to be blasé bout the tree you're turning into."' 56%

Erm, what?! That's one way to have me desperate to get to 56% straightaway! I mean, we've lost people, people are turning into trees... this is definitely my type of book!