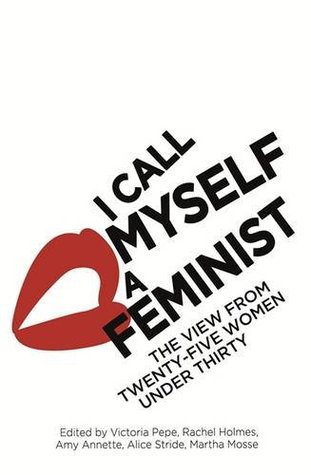 During my Bachelor I was, in certain circles, known as 'the Feminist one' of my friend group. As I've gotten older I've become more and more aware of how strong the label of Feminist actually makes me feel. When Virago approached me with the idea of a blog tour for I Call Myself A Feminist I knew I wanted to be a part of it and when I found out who was a part of this collection of essays I knew it was something that belonged on my blog! Thanks to Virago for providing me with a copy of this book in exchange of an honest review.


Is feminism still a dirty word? We asked twenty-five of the brightest, funniest, bravest young women what being a feminist in 2015 means to them.

We hear from Laura Bates (of the Everyday Sexism Project), Reni Eddo-Lodge (award-winning journalist and author), Yas Necati (an eighteen-year-old activist), Laura Pankhurst, great-great granddaughter of Emmeline Pankhurst and an activist in her own right, comedian Sofie Hagen, engineer Naomi Mitchison and Louise O'Neill, author of the award-winning feminist Young Adult novel Only Ever Yours. Writing about a huge variety of subjects, we have Martha Mosse and Alice Stride on how they became feminists, Amy Annette addressing the body politic, Samira Shackle on having her eyes opened in a hostel for survivors of acid attacks in Islamabad, while Maysa Haque thinks about the way Islam has informed her feminism and Isabel Adomakoh Young insists that women don't have to be perfect. There are twelve other performers, politicians and writers who include Jade Anouka, Emily Benn, Abigail Matson-Phippard, Hajar Wright and Jinan Younis.

Is the word feminist still to be shunned? Is feminism still thought of as anti-men rather than pro-human? Is this generation of feminists - outspoken, funny and focused - the best we've had for long while? Has the internet given them a voice and power previously unknown?

Feminism seems to be on the rise in a way that it has never been. Women (and men!) all across the world are proudly claiming the label for themselves, forming a united front against sexism on all levels of life. On the other hand there seems to be an outrage about feminism every single day, with women being pitted against each other by the media and negative body images still being predominant. I believe the whole movement is very much at a crossroads where this new wave of Feminism has to decide which way it will go. We as a group have never been more intersectional and aware of each other (although I grant a lot still has to happen on the former) and I Call Myself A Feminist couldn't be a better example of which road we should all be taking. The editors have done their best to bring together voices from all over the world, from different backgrounds and convictions. Although the essays address topics which could potentially be triggering for some, each topic is treated with kindness by its respective author. Rather than the 'preaching and aggressive'-stereotype of feminism that the media likes to portray, this collection shows feminism from its engaging and even funny side.

This collection of essays gives a voice to a generation of feminists that are both ridiculed by the media while also having major expectations loaded upon them. On the one hand young girls nowadays are so loud, have too many opinions and expect too much, but on the other hand they never do enough, aren't radical enough or strong enough. What these essays show is that across the world there are strong, young women who have their own story to add and their own voice to add to the general cry. As a young twenty-two year old it is incredibly empowering to read people of my age, my generation, be so eloquent and convinced about their beliefs. On the other hand, as a white and middle-class woman it is my responsibility to realize how different life is for women different parts of the world. While I rage about catcalls, black women are still facing increased sexual danger because of their race, while transsexual women are denied some of their most basic rights.

This collection covers a great number of topics, about how (and if) religion and feminism go together, how it's our inner misogynist we have to conquer and the rightful place of transgender women in the ranks of feminists. All of the authors are under thirty, showing that within thirty years (and in many cases in less) women face a lot of issues that can show them the importance of equality. Amongst my favourite essays were 'My journey to Feminism' by Louise O'Neill, who wrote the brilliant Only Ever Yours and Asking For It, 'Roti kamana: stories of survival' by Samira Shackle about acid attack survivors in India and Pakistan and 'Women should get to be rubbish too' by Isabel Adomakoh Young. But every essay in this collection has a unique view to offer, a voice that makes you reconsider what you believed and thoughts. It's a collection I see myself rereading frequently, as it becomes relevant for me to remind myself who is out there with me.

I absolutely loved I Call Myself A Feminist. This is the kind of collection that can introduce young girls to the new voices of feminism, the women who will be pushing this until men and women are equal on all fronts. This collection shows how varied we are, how different we are and yet how we all have a common goal. I will be giving this one to everyone who questions whether this new generation of feminist has anything to offer!