Review: 'A Banquet of Consequences' by Elizabeth George 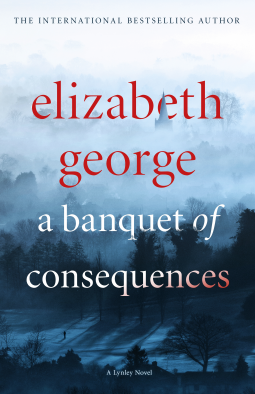 I discovered my passion for crime and detective fiction at a suspiciously young ago but picking up a crime novel that was way too gory and intense for a 9-year old. Elizabeth George was the one who wrote that book and I've been in love with her Inspector Lynley-series ever since despite not reading it frequently. So I was extremely excited to see another one of her books pop into my life. Thanks to Hodder & Stoughton and Netgalley for providing me with a copy of this book in exchange for an honest review.

Inspector Lynley investigates the London end of an ever more darkly disturbing case, with Barbara Havers and Winston Nkata looking behind the peaceful façade of country life to discover a twisted world of desire and deceit.

The suicide of William Goldacre is devastating to those left behind. But what was the cause of his tragedy and how far might the consequences reach? Is there a link between the young man's leap from a Dorset cliff and a horrific poisoning in Cambridge?

Following various career-threatening misdemeanours, Detective Sergeant Barbara Havers is desperate to redeem herself. So when a past encounter with bestselling feminist writer Clare Abbott and her pushy personal assistant Caroline Goldacre gives her a connection to the Cambridge murder, Barbara begs DI Thomas Lynley to let her pursue the crime.

Full of shocks, intensity and suspense from first page to last, A Banquet of Consequences reveals both Lynley and Havers under pressure, and author Elizabeth George writing at the very height of her exceptional powers.

As I said, I was a fan of Elizabeth George before I started reading A Banquet of Consequences. I didn't have to be convinced that she was a good author, but she did have to show me that after all this time there is still spirit left in Inspector Lynley and co.Whenever these kinds of series drag on too long it becomes obvious, with too much happening for the little time that's passing, with main characters that really are so emotionally scarred they shouldn't be able to function normally. I always liked the way George treated her main characters, both the care and the recklessness with which she painted them and their exploits. I was wondering whether I'd fall into liking them as easily again as I did the first time, but it only took me a few chapters to connect this book to the last one I read in the series and love them all again.

What is key to a detective/crime novel is that it manages to set up both stories that it's trying to tell. On the one hand there is the story of the crime, which is often told through the survivors of the crime and those closest. And then on the other hand there is the story of the detective, the woman or man who are chasing down the criminal, following clues and themselves desperate to get to the ending of the book. If either of those two doesn't work, is boring or starts flagging the whole structure of a crime book really falls apart. Elizabeth George is a professional and knows the genre as well as anyone could and both stories work in A Banquet of Consequences. The struggles of the main series-characters clearly have their origin in earlier books and despite not having read those I wasn't ever lost when it came to them.

In A Banquet of Consequences George really focuses on the toxicity of family, friendship and gender relationships. The Goldacres are a turbulent family, to say the least, from the very start of the book but they only descend into more chaos as it progresses. George offers us everything, from broken first marriages and estranged parents to possessive mothers and frenemies. It could feel like a little bit too much, as it often does with these kinds of books. How can one family have so many issues all at once? And why are they coping with it so badly? George switches between narrators, which allows her to portray all the different sides of the conflicts and not le it become too much. The progression of the novel feels natural and the pace is high without skipping over important things.

Elizabeth George is a master of  crime fiction. She knows exactly what to do and how to manipulate her readers into the position where she wants them. Her new characters are fascinating and horrible, whereas returning to the series-staples was amazing. I'd recommend this to anyone who wants a good crime novel to curl up with this winter!
Posted by Juli Rahel at 11/16/2015 02:00:00 pm