Review: 'Leading the Blind: A Century of Guide Book Travel' by Alan Sillitoe 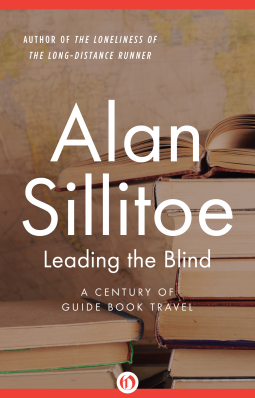 As some of you may know, I absolutely love travelling. And although I love travelling to faraway places, there is simply something about travelling around Europe which I simply love. Perhaps because the cultures feel so close to home and yet so different, the beautiful architectures and landscapes which, as a European, feel like they were made for me... basically I'm a Europhile. And as a non-Brit living in Britain I've grown increasingly intrigued at how us Europeans are viewed by the islanders. So when I saw Alan Sillitoe's Leading the Blind I was immediately interested. Thanks to Netgalley and Open Road Media for providing me with a copy of this book in exchange for an honest review.

A journey into nineteenth-century travel guides to the UK, Europe, and Soviet Union as researched and written by one of England’s most distinguished authors.

In this quirky and illuminating social history, bestselling British author Alan Sillitoe culls fascinating details from Victorian-era guidebooks and travelogues in order to recount the pleasures, dangers, traps, and delights of travel in the century leading up to World War I. For instance, in Switzerland, an English officer once fell into a bears’ den and was “torn in pieces.” In Paris, the outdoor seating at cafés was in “unpleasant proximity to the gutters.” In Germany and the Rhine, the denominations marked on coins did not necessarily indicate their value. And in Northern Italy, a traveler could look forward to a paradise of citron and myrtle, palms and cyclamen.

For the armchair traveler journeying into a bygone era, Sillitoe begins with the essential practicalities relevant to any tourist: the price of passports and visas, how best to clear customs, and how many bags to pack. He includes timeless advice, such as: Board a boat on an empty stomach if you are prone to seasickness, and always break in your boots before embarking on a trip. Anachronistic recommendations abound as well: It is best to leave your servant at home, carry your milk with you when traveling to small Italian villages, and not pay children and “donkey women” for flowers.

From convalescent hotels in the South of France to malaria-ridden marshes between Rome and Naples, and from the chaos of Sicily and southern Italy to the dazzling bullfights and rampant thieves of sunny Spain, Sillitoe guides readers through the minutiae of the Mediterranean with wit and historical insight. Then he takes an anecdote-filled road east into Greece, Egypt, the Holy Lands, Turkey, and Russia. Of course, the Grand Tour would not be complete without a thorough account of his home turf of England, with her idiosyncratic hamlets, smoke-filled skies, and working-class townsfolk in high-buckled shoes.

At once a fascinating history of travel books from 1815 to 1914 and an entertaining ode to wanderlust, Leading the Blind brings to life the absurd and profound wonders of Victorian globetrotting. With simple but captivating prose, Sillitoe also shows how the way we view foreign lands can reveal a lot about what is happening at home.

Travel has been a crucial part of British culture, for the upper classes that is, since the Napoleonic wars. Once relative peace arrived in Europe, the Brits started venturing out. And for that, they needed guide books. Some of the most famous British novels, such as A Room with a View for example, not only show protagonists on these travels but even make reference to such famous guide books as Baedeker's ones. Initially this took the form of the Grand Tour in the 17th and 18th centuury, during which young heirs, and sometimes heiresses, were let loose on the Continent to soak up as much culture and learning before settling down in their country manors. Sillitoe gives his readers access to a more commercialised type of travelling, sharing excerpts from different types of guidebooks which he humorously surrounds with his own thoughts, bringing together the process of going travelling as well as different locations. I loved reading some of the thoughts Victorian Brits had about France and Spain, or how different European countries were compared.

The UK and Europe have a fascinating history, one that has been trademarked by a slight hesitation on one side and a slight apprehension on the other. Naturallly what interested me the most about Leading the Blind, and what makes it also quite a contemporary and important novel, is, to bring it up again, the relationship between the UK and the rest of the world, but especially Europe. Leading the Blind contains both interesting trivia as well as space for contemplation. For example, I did not know passports and visas were already required in the 19th century, and am slightly mad over how cheap they were. At the same time Sillitoe pays attention to the British idea that they improved the continent through its attention, the proud fact that their money spawned so many guesthouses for the specific British presence, and that of course this could only be good. There is a sense of superiority in these excerpts which feels almost awkward, as if it is at least partially forced. Also interesting was the growth of the middle class which has made possible the society we currently try to enjoy.

Sillitoe makes Leading the Blind a very entertaining book when it could have been a very boring one. Social history doesn't exactly scream excitement to most readers, but there is something beautifully innocent about these guidebooks and how much they reveal. Whether it's astonishment over the behaviour of some Brits abroad or the constant reminders that of course some areas simply were not suited for women's sentiments, the guidebook excerpts chosen by Sillitoe reveal an incredibly amount of information about British sentiments and how they have changed. Because that's an added factor of interest as well. Leading the Blind covers guide books from the Victorian Era to the First World War, covering one of the calmest and yet most revolutionary centuries in European history. The world changed a lot between 1815 and 1914, and I enjoyed seeing this century through different glasses. I wasn't familiar with Alan Sillitoe or his writing before Leading the Blind. His writing is incredibly enjoyable and I will definitely be looking out for more of his work. Apparently he was one of the "angry young men" of the 50s, which is something I'm immediately going to investigate.

Leading the Blind is an incredibly fun and interesting read. Those two things don't often fit together as nicely as Sillitoe makes them fit in Leading the Blind. It's a perfect holiday read, especially if you're visiting Europe, but also great for those of us who have to remain at home. I'd recommend this to people interested in social history.