Friday Memes: '"Keep the Damned Women Out": The Struggle for Coeducation' by Nancy Weiss Malkiel 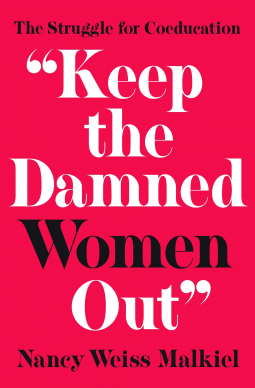 I love being at university and the last four years have incredibly enriched my life. So the idea that only a generation ago coeducation (the education of men and women together) at university level was still a very contentious topic and that this would've made  my life completely different is quite scary. So when I saw "Keep the Damned Women Out" I knew I wanted to read it.

As the tumultuous decade of the 1960s ended, a number of very traditional, very conservative, highly prestigious colleges and universities in the United States and the United Kingdom decided to go coed, seemingly all at once, in a remarkably brief span of time. Coeducation met with fierce resistance. As one alumnus put it in a letter to his alma mater, “Keep the damned women out.” Focusing on the complexities of institutional decision making, this book tells the story of this momentous era in higher education—revealing how coeducation was achieved not by organized efforts of women activists, but through strategic decisions made by powerful men.

In America, Ivy League schools like Harvard, Yale, Princeton, and Dartmouth began to admit women; in Britain, several of the men’s colleges at Cambridge and Oxford did the same. What prompted such fundamental change? How was coeducation accomplished in the face of such strong opposition? How well was it implemented? Nancy Weiss Malkiel explains that elite institutions embarked on coeducation not as a moral imperative but as a self-interested means of maintaining a first-rate applicant pool. She explores the challenges of planning for the academic and non-academic lives of newly admitted women, and shows how, with the exception of Mary Ingraham Bunting at Radcliffe, every decision maker leading the charge for coeducation was male.

Drawing on unprecedented archival research, “Keep the Damned Women Out” is a breathtaking work of scholarship that is certain to be the definitive book on the subject.

The 1960s marked a major turning point in elite higher education in the United States and the United Kingdom. As the decade opened, colleges and universities closely resembled the institutions they had been in the 1950s and earlier. By end of the 1960s, so much had changed. The familiar contours of college and university life had been upended and reshaped in profoundly important ways: in the composition of student bodies and faculties, structures of governance, ways of doing institutional business, and relationships to he public issues of the day.' p.1

This perhaps isn't the most immediately riveting read, but as some of you may know I'm trying to work my way through university after university, degree after degree, so I was immediately interested in this book. As a woman I was expecting to be able to go to University, as long as I got the grades and scrambled the money together, so I wanted to know more about the decade in which women were officially allowed into "elite higher education".


''The Yale Daily News welcomed Griswold's denial. "Oh save us!" the paper exclaimed: "Oh save us from the giggling crowds, the domestic lecture, an the home economics classes of a female infiltration... We will not spend our 25th reunion drinking with overweight matrons and their husbands who went to Hofstra."' p.56

Oh God, the fear of women and the not even secret sexism and prejudice that runs through that quote fro the Yale Daily News. It is never easy to change the status quo, but it is a shame that it always has to meet with such resistance.