Review: 'The Arrival of Missives' by Aliya Whiteley 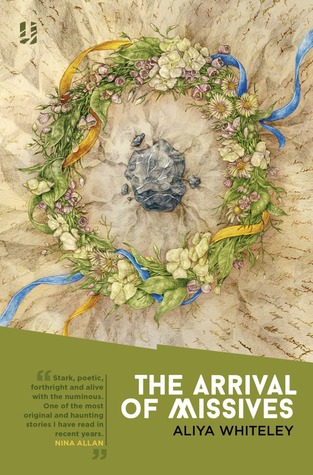 Speculative Fiction is a genre I have only slowly grown to appreciate as my own taste in fiction has developed over the last few years. Part of my initial confusion at some classics of the genre, such as many Margaret Atwood books, lay in their speculative nature, which simple seemed to lie just outside my grasp. What changed that for me was Aliya Whiteley's The Beauty which became one of my favourite novellas and started some very interesting conversations. So when I saw one of Whiteley's latest novellas within my grasp I, of course, went straight for it. Thanks to Unsung Stories for providing me with a copy of this book in exchange for an honest review.


The Arrival of Missives is a genre-defying story of fate, free-will and the choices we make in life. In the aftermath of the Great War, Shirley Fearn dreams of challenging the conventions of rural England, where life is as predictable as the changing of the seasons.

The scarred veteran Mr. Tiller, left disfigured by an impossible accident on the battlefields of France, brings with him a message: part prophecy, part warning. Will it prevent her mastering her own destiny?

As the village prepares for the annual May Day celebrations, where a new queen will be crowned and the future will be reborn again, Shirley must choose: change or renewal?


The Arrival of Missives clocks at a 120 pages and is an incredibly engrossing and quick read. Whether a novel reads quickly, as such, has nothing to do with page count. A short story can feel like War and Peace if badly written, while War and Peace can fly by if Tolstoy is your thing. In the case of Whiteley's novella, time flies by while you're reading. It is almost impossible to put it down halfway through, so well-written and thought-provoking is it. It is one of Speculative Fiction's tasks, and opportunities, to shine a light on society, its traditions and customs, and express its dissatisfaction with it. As such, authors of Speculative Fiction have access to a whole range of tools from other genres such as Historical Fiction and Science Fiction in order to create alternate histories in which certain ideas or traditions take centre stage. In the end, however, the world created is always one which is painfully recognizable and that is where the crux of the genre lies. Whiteley is brilliant at creating worlds which are similar enough to our contemporary one but with enough "Other" elements or influences that there is a constant sense of the uncanny about it as well. As a consequence the reader sticks close by her characters as guides through these 'uncomfortably familiar yet not' worlds.

At the heart of The Arrival of Missives is the young Shirley Fearn who grows up in rural England shortly after World War I, a conflict that forever changed Europe. As men died on the battlefields in France, women found themselves in a world which gave them both more responsibilities as well as freedoms, which were promptly curtailed again. Shirley is a fascinating main character who has a set idea of what it is she wants and finds all kinds of other futures laid out for her by those around her. Partly because of her own awakening self, Shirley gives the reader an unflinching insight into the gender-relations of her village and her growing awareness of the social relationships around her. Fascinating especially is her relationship with her mother, a woman she thinks has either never dreamed or immediately conformed, and of whom her opinion slowly changes throughout the novella as Shirley herself is confronted with the latent desires of society regarding women and their lives.

Much of Shirley's journey throughout the novella surrounds her trying to find her own way to live. As she tries to unravel and avoid the strands of other people's plans around her, she becomes more and more tangled in a plan that seems as inevitable as fate. Whiteley astutely asks the reader to think about fate, what it means to have someone to tell you you a destined for one thing and for someone else to present you another fate, seemingly equally destined. It's close to impossible to discuss the novella's arguments more without revealing significant plot spoilers, but Whiteley discusses choice and fate and whether either exists in a way that feels personal rather than academic. Her narrative takes unexpected turns and although some of her choices may seem strange, there is an undeniable sense of truth to what she writes.

First with The Beauty, and now with The Arrival of Missives Aliya Whiteley has established herself as one of my favourite contemporary authors. She has a very strong voice and a fascinating mind and both shine through her prose on the page. There is an immediacy to Shirley's narration throughout, a sense that the reader is right there with her experiencing life in rural England. I'm still convinced that first person narration should only be used when an author knows they will absolutely nail it and thankfully Whiteley does exactly that in The Arrival of Missives. Shirley reads like a teenage girl, attracted to the world and at the same time disgusted by it. She feels intensely, but is also still new to the world. By the end of The Arrival of Missives I absolutely loved her. This novella asks questions to which it doesn't necessarily provide answers but which it asks you to at least think about yourself.

I give this novella...

The Arrival of Missives is one of the best novellas I have read since I read Whiteley's The Beauty. It keeps readers on their toes and thinking throughout, constantly exciting and engaging. On the one hand I wish for more, and on the other hand Missives is perfect as it is. I'd not only recommend it to fans of Speculative Fiction but also to anyone willing to give something a little bit different a try. It won't disappoint.
Posted by Juli Rahel at 8/30/2016 09:44:00 am