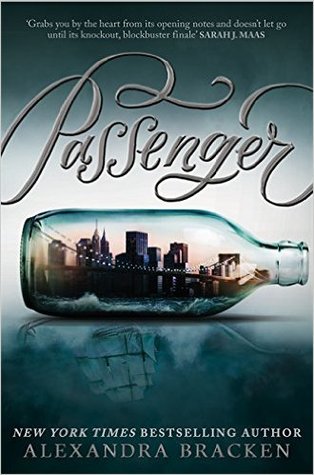 Today is the Quercus publication date for Passenger, Alexandra Bracken's stunning novel! Although you'll have to wait till Saturday for my own review I'm very happy to present you with a spotlight post, just to draw your interest a little bit in case you have managed to somehow miss this book in the last few months!


In one devastating night, Etta Spencer loses everything she knows and loves. Thrust into an unfamiliar world by a stranger with a dangerous agenda, Etta is certain of only one thing: she has travelled not just miles but years from home.

Nicholas Carter is content with his life at sea, free from the Ironwoods - a powerful family in the Colonies - and the servitude he's known at their hands. But with the arrival of an unusual passenger on his ship comes the insistent pull of the past that he can't escape and the family that won't let him go. Now the Ironwoods are searching for a stolen object of untold value, one they believe only Etta, his passenger, can find.

Together, Etta and Nicholas embark on a perilous journey across centuries and continents, piecing together clues left behind by the traveller who will do anything to keep the object out of the Ironwoods' grasp. But as they get closer to their target, treacherous forces threaten to separate Etta not only from Nicholas but from her path home forever.

I was born in Phoenix, Arizona and spent all of my life there up until college–I miss it all of the time, but primarily when I’m forced to deal with ice/snow/mass transit/or some combination of the three.  I’m a middle child, which supposedly means I’m full of angsty feelings of neglect, but, in reality, it just means I’m always sandwiched between my older sister and younger brother in Christmas pictures.  On a whole, I had a pretty typical childhood, with only one big exception: my dad was a big time Star Wars collector, which means I went to more antique shows, toy stores, and Star Wars conventions then you could ever imagine! No, really, I’m up to six conventions. I will now pause to let that soak in…

I recently graduated with a degree in History and English from The College of William & Mary in Virginia. (Four years in Colonial Williamsburg is enough to give anyone a sense of humor about life, trust me.) I began writing Brightly Woven there during my sophomore year as a birthday present to my dearest, darlingest friend Carlin… and finished six months AFTER that date. The number one question I get asked is how I wrote a novel while I was still in school. There are two answers to this: sacrificing a social life and a depressingly effective will to see even the most futile projects through.  I signed with my agent on my 21st birthday, and sold it later that year.  I spent a good portion of my senior year buried under edits, and the rest of that year trying to figure out what else I was going to do with my life.

After graduating, I left my colonial bonnets behind and moved to New York City, where I attended the Columbia Publishing Course and worked in publishing for five years. I now write full time.

And Quercus has been generous enough to send along a little sample for me to share with you from the third chapter! So do be aware that this may contain some spoilers! Have a read below:


THERE WASN’T A PART OF ETTA THAT DIDN’T FEEL RAW and battered; the aching inside her skull did nothing to dampen the rank smell of blood and body odor, and something else that almost smelled like fireworks.
Looking from face to face—the knit caps, a crooked and fraying wig, a few wet eyes discreetly wiped against shoulders— her mind began the work of piecing it all together as if she were sight-reading a new piece of music. The notes became measures, and the measures phrases, until finally the whole melody drifted through her.
She was not in the museum. So, obviously, the rescue workers must have carried her out into the street, away from that strange explosion of noise and light. Her skin, hair, and dress were drenched through and through, because—because of the building’s sprinklers, right?
And the costumes . . . maybe there had been some kind of play going on in a nearby building and they’d rushed out to help? Etta wasn’t sure—what did firemen actually wear under their uniforms? No, Etta, she thought, they don’t wear loose white shirts, or buckle shoes, or hats straight out of Masterpiece Theatre. So . . . a play. Theatrical production. They’d either been caught in the explosion . . . attack, whatever it had been, or had some very authentic makeup.
Mom? She tried to get her mouth around the word, but her throat felt like it had been scraped with a razor. Alice. Alice had been shot—Alice was—she was—