Friday Memes and 'Neomedievalism, Neoconservatism, and the War on Terror' by Bruce Holsinger 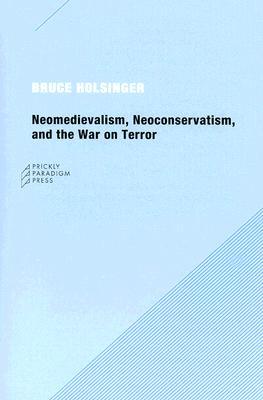 Today I'm sharing a book with you that is not necessarily fun but incredibly interesting and mandatory reading for university. I also got to use my lecturer's copy which wasn't terrifying at all... every time I held a drink I was scared I'd spill it all over his books. And academic books are so ridiculously expensive I would've cried if I'd ruined it. Anyways, let me introduce you to Neomedievalism, Neoconservatism, and the War on Terror by Bruce Holsinger.


President Bush was roundly criticized for likening America’s antiterrorism measures to a “crusade” in 2001. Far from just a gaffe, however, such medievalism has become a dominant paradigm for comprehending the identity and motivations of America’s perceived enemy in the war on terror. Yet as Bruce Holsinger argues here, this cloying post-9/11 rhetoric has served to obscure the more intricate ideological machinations ofneomedievalism, the global idiom of the non-state actor: non-governmental organizations, transnational corporate militias, and terrorist organizations such as al Qaeda.

'Neomedievalism, Neoconservatism, and the War on Terror' addresses the role of neomedievalism in contemporary politics. While international-relations theorists promote neomedievalism as a model for understanding emergent modes of global sovereignty, neoconservatives exploit its conceptual slipperiness for their own tactical ends. Holsinger concludes with a careful parsing of the Bush administration’s torture memos, which enlist neomedievalism’s model of feudal sovereignty on behalf of the abrogation of human rights.

Book Beginnings and Friday 56 are hosted by Gillion over at Rose City Reader and Freda at Freda's Voice respectively.


'On September 14, 2001, Thomas Friedman devoted his column in The NY Times to what he termed the "civil war within Islam", an epochal struggle pitting the modernizing advocates of progressive democratization across the Near and Middle East against the reactionary forces of Islamist fundamentalism. As Friedman described it, this civil war symbolized a larger reordering of world alliances equal in its impact tot he momentous geopolitical upheavals of the twentieth century. "Just as World Wars I and II produced new orders and divisions, " Friedman wrote, "so too might this war." One such division stretches across a chasm not of place, belief, or population, however, but of time.' p.3

I absolutely love that I get to apply some of my medieval knowledge and see how it's used in the world andI totally agree with Holsinger throughout this book. Post 9/11 the idea of the Middle Ages and of "medieval" was used to cast one side of the conflict as ancient and hence in need of destruction and the other as extremely modern and hence "good". This led not only to a complete misinterpretation of the Middle Ages but also to an increasingly widening gap of understanding between West and East.


Quote from Hedley Bull's The Anarchical State: A Study of Order in World Politics'It is ... conceivable that sovereign states might disappear and be replaced not by a world government but by a modern and secular equivalent of the kind of universal political organisation that existed in Western Christendom in the Middle Ages. In that system no ruler or state was sovereign in the sense of being supreme over a given territory and a given segment of the Christian population;' quoted on p.56

I definitely think I want to pick up Bull's book. Being bi-national, the idea of a state has never had much importance to me because I don't belong to a single one anyway. As a mainland European I also think I probably have quite a different view on the benefits that less emphasis on nation states might have. I'm aware however that it is a scary concept for many because of national pride and the fear of the loss of national identity.

I get that Neomedievalism, Neoconservatism, and the War on Terror isn't exactly everyone's cup of tea but are you intrigued by its ideas? Do you think you'd be interested to find out more about it? I might consider putting up a discussion of some of its points and ideas, if people would be interested :)
Posted by Juli Rahel at 4/01/2016 01:06:00 am