Review: 'The Trees' by Ali Shaw 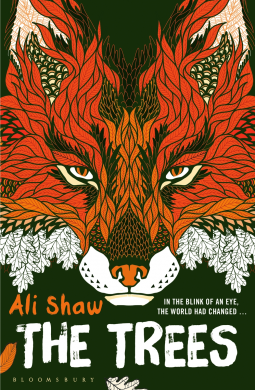 The blurb of The Trees immediately caught my eyes and I simply couldn't pass up on the chance to read it. I'm such a fan of Magical Realism and Fantasy mixing with Contemporary Fiction that Ali Shaw's novel simply seemed absolutely perfect. The fact it had an absolutely stunning cover didn't hurt ether. And I'm so happy I did give it a chance! Thanks to Bloomsbury Publishing and Netgalley for providing me with a copy of this book in exchange for an honest review.

There came an elastic aftershock of creaks and groans and then, softly softly, a chinking shower of rubbled cement. Leaves calmed and trunks stood serene. Where, not a minute before, there had been a suburb, there was now only woodland standing amid ruins…

There is no warning. No chance to prepare.

They arrive in the night: thundering up through the ground, transforming streets and towns into shadowy forest. Buildings are destroyed. Broken bodies, still wrapped in tattered bed linen, hang among the twitching leaves.

Adrien Thomas has never been much of a hero. But when he realises that no help is coming, he ventures out into this unrecognisable world. Michelle, his wife, is across the sea in Ireland and he has no way of knowing whether the trees have come for her too.

Then Adrien meets green-fingered Hannah and her teenage son Seb. Together, they set out to find Hannah’s forester brother, to reunite Adrien with his wife – and to discover just how deep the forest goes.

Their journey will take them to a place of terrible beauty and violence, to the dark heart of nature and the darkness inside themselves.

The Trees is an amazing combination of Magical Realism and something that feels more legendary and fantastical. From the moment the trees rise from the ground Shaw's narrative takes off and doesn't quite let go of its reader till the end. This might sound like a given, but nature has always been a massive part of human life. On the one hand it is a constant source of creation and of nurturing comfort, but on the other hand we have all seen the destructive power, the sheer enormity of, nature's force directed against us as well. This power lies at the bottom of this novel, constantly rearing its head before returning to a quiet slumber. Shaw gives each of her characters a reason why they end up struggling against this power, which symbolically is also a struggle against their own nature. Whether it is homebody Adrien leaving his couch, or Seb of the Internet-generation, each has to find a new place for themselves in a world where nature is no longer tames and once again unreliable.

The narrative moves between different narrators, giving each of the main four (Adrien, Hannah, Seb and a young woman who became probably my favourite characters) a chance to talk throughout the story. I've found this shifting between narrators very enjoyable when done well and it works for The Trees where our protagonists are a bunch of virtual strangers. Digging into each of their histories, following them as they plot through a landscape that fears between horrendous and fantastical, we really get to know them very well. At times their development plods along a bit, but this feels quite purposefully done as the reader is forced to share some of their experiences. The relatively slow grind of it, however, may not be for everyone.

Shaw's writing is what makes this novel. A brilliant idea can fall flat when it isn't being served by a good author and in the case of The Trees both idea and author come together to deliver what might be my favourite book of 2016 so far. There are paragraphs of stunning prose in The Trees, as well as heart-achingly beautiful plot twists, and each is down to Shaw's skill. There has always been something intensely majestic about trees which has always made me love them and Shaw captures it perfectly. The magic and life with which her wood is infused pleases me incredibly and the new world she creates with them is fascinating. The divide it creates between those who fear and those who embrace nature could have been worked out a bit more but that would've made the novel lose some of its magic, I think.

I absolutely loved The Trees! It completely captured my imagination and I wished the book would never end. Following Shaw's characters as they figure out how to cope with their whole world changing was very interesting as well, as it triggers you to mull over the question yourself. I'd recommend this to fans of Magical Realism and Fantasy.
Posted by Juli Rahel at 4/13/2016 12:49:00 pm