Teasers and 'The Elements of Eloquence' by Mark Forsyth 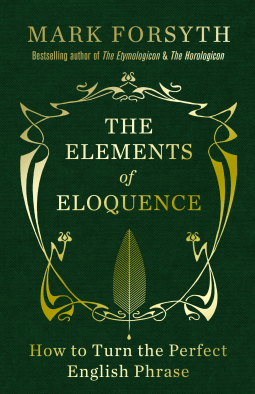 As this post posts itself I'm on my way to hand in my final essay of the Autumn term and have three weeks of quiet to look forward to. I'm going to make a plan for myself on what to read, what to schedule for when, etc. But before then, let's get cracking with some memes! Today I'm using The Elements of Eloquence by Mark Forsyth!


The idiosyncratic, erudite and brilliantly funny new book from Mark Forsyth, bestselling author of The Etymologicon and The Horologicon.

In an age unhealthily obsessed with substance, this is a book on the importance of pure style.

From classic poetry to pop lyrics and from the King James Bible to advertising slogans, Mark Forsyth explains the secrets that make a phrase - such as ‘Tiger, tiger, burning bright’ or ‘To be or not to be’ - memorable.

In his inimitably entertaining and witty style he takes apart famous lines and shows how you too can write like Shakespeare or Oscar Wilde. Whether you’re aiming for literary immortality or just an unforgettable one-liner, The Elements of Eloquence proves that you don't need to have anything to say - you simply need to say it well.

I just reviewed The Elements of Eloquence, which I should've read ages ago really, and it made me laugh and chuckle quite often. I'm sure everyone has those moments where they forget they're on a train and laugh hysterically and then... you look like an idiot. Well, if you laugh over this book hopefully you'll look like an idiosyncratic and erudite idiot!

Tuesday Intros and Teaser Tuesdays are hosted by Diano over at Bibliophile by the Sea and MizB from A Daily Rhythm, respectively.


'Shakespeare was not a genius. He was, without the distant shadow of a doubt, the most wonderful writer who ever breathed. But not a genius. No angels handed him his lines, no fairies proofread for him. Instead he learnt techniques, he learn tricks, and he learnt them well.' 1%

I actually love how Forsyth takes some of the most beautiful sentences in English apart in this book. I'm sure Shakespeare would've loved it as well, to have someone understand the nuances and the tricks he worked with!


''Stern people dislike rhetoric, and unfortunately it's usually stern people who are in charge: solemn fools who believe that truth is more important than beauty.' 5%

It's definitely a shame that the beauty of language seems to have disappeared from most of the daily discourse but also the inventiveness of it. This last sentence was bod standard and there is nothing clever about it. Cleverness takes time, but it's usually worth it.


'Americans seem particularly fond of such verbal symmetries, and tend to elect anybody who can come up with a symmetrical sentence.' 65%

Forsyth is talking about the Chiasmus here and well... he does have a point! There's something about a symmetrical sentence which makes someone look incredibly intelligent and straightforward. The best example of an American President's chiasmus is, in my opinion, 'Ask not what your country can do for you, but what you can do for your country' by Kennedy!