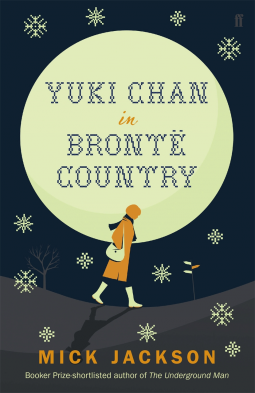 Ever since I read Jane Eyre and then devoured Wuthering Heights and Agnes Grey I've been a Brontë  (but especially an Emily) fan. The whole concept of the three sisters itself is beautiful in and of itself but the impact they have had on English literature is nothing to scoff at either. So when I saw Yuki Chan in Brontë Country I knew I'd want to read it. And I'm most certainly glad I did! Thanks for Faber & Faber and Netgalley for providing me with a copy of the book in exchange for an honest review.

'They both stop and stare for a moment. Yuki feels she's spent about half her adult life thinking about snow, but when it starts, even now, it's always arresting, bewildering. Each snowflake skating along some invisible plane. Always circuitous, as if looking for the best place to land...'

Yukiko tragically lost her mother ten years ago. After visiting her sister in London, she goes on the run, and heads for Haworth, West Yorkshire, the last place her mother visited before her death.

Against a cold, winter, Yorkshire landscape, Yuki has to tackle the mystery of her mother's death, her burgeoning friendship with a local girl, the allure of the Brontes and her own sister's wrath.

Both a pilgrimage and an investigation into family secrets, Yuki's journey is the one she always knew she'd have to make, and one of the most charming and haunting in recent fiction.

As a verified Brontë fan I couldn't have passed this book and not been intrigued. What makes Yuki Chan in Brontë Country stand out from a lot of other Brontë-inspired literature is that it is inspired and not derivative. This is no adaptation of a Brontë novel or a slight spin on the sisters' own lives. There are no winks to the books, cheeky mentions to Mr. Rochester or women in attics. Rather, Jackson seems to have recognised the mood that suffuses all of their novels and recreates that in his own. There is something intensely Gothic and out of the ordinary about Yuki Chan. Jackson's willingness to let Yuki explore everything from snow flakes to ghosts means that there is an atmosphere of the uncanny and random about the whole book which keeps the reader a little bit unsettled throughout.

Yuki Chan in Brontë Country isn't necessarily an easy book to read and it can feel strange at times. Jackson very much puts the reader into Yuki's head which means that when she panics or worries, the reader isn't far behind. Usually this works to the favour of the book, letting the reader suspend his or her sense of disbelief for a bit, but throughout the book there are moments at which it feels as if the ambitions of the novel are a little bit beyond its scope. I kept waiting for something truly big to happen and kept feeling disappointed. On the one hand this places one directly in Yuki's shoes, but on the other hand it causes frustration. The biggest let down for me was the relatively sudden ending. I had hoped for more and felt left with questions.

Jackson's writing itself was great. He hits both comic notes and darker tones, even allowing the two to come together frequently to create the aforementioned uncanny atmosphere. All his characters feel very human, with their messy relationships, complicated histories and strange fascinations. For me one of the greatest accomplishments of the book is that Jackson manages to write Yuki as Japanese without making her "exotic". Her habits may be different and she may stand out a bit from plain West Yorkshire, but Jackson never exploits her foreignness for plot. On the other hand, he also never forgets that she is a stranger in a strange land. Jackson lets Yuki ramble and go on tangents, not really care about the Brontës all that much and be really, really lost occasionally. It makes for a fascinating main character.

I really enjoyed reading Yuki Chan in Brontë Country. There was something dark and engrossing about it which made it feel like an indirect tribute to that recognizable Brontë style. At times the book seems to lose focus a bit, but I'd recommend it to anyone who is up for an engrossing and unconventional read.
Posted by Juli Rahel at 1/22/2016 12:24:00 pm