Review: 'Property Of' by Alice Hoffman 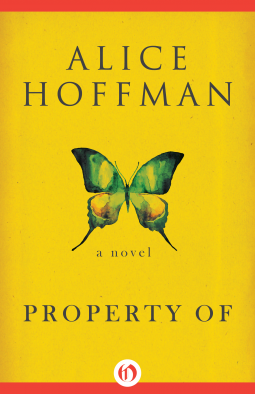 Alice Hoffman is perhaps best known for her novel Practical Magic, which was turned into an highly entertaining movie. This year also saw her publishing The Museum of Extraordinary Things which I myself immensely enjoyed. However, Hoffman has been writing for years and it is her first novel that is up for discussion now. And what a way to make an entrance into the literary world!

The mesmerizing debut of a major American writer

On the Night of the Wolf, the Orphans drive south on the Avenue, hunting their rival gang, the Pack. In the lead is McKay, their brooding, courageous President. Left waiting at the clubhouse is the Property of the Orphans, tough girls in mascara and leather who have declared their allegiance to the crew. Tonight, a new girl has joined their ranks. She waits only for McKay.

Drag races, dope, knife fights in the street. To the seventeen-year-old heroine of Alice Hoffman’s stunning first novel, the gritty world of the Avenue is beautiful and enthralling. But her love for McKay is an addiction—one that is never satisfied and is impossible to kick. Deeper and deeper she falls, until the winter’s day when she decides to break the spell once and for all.

A strikingly original story about the razor-thin line between love and loss, Property Of showcases the vivid imagery, lyricism, and emotional complexity that are the hallmarks of Alice Hoffman’s extraordinary career.

This would be one hell of an introduction to Hoffman. Having seen or read Practical Magic, you might think you know what she is all about, but Property Of is unlike any book I have read and I have to be quite honest and say that I am slightly in love with it the way out protagonist is in love with McKay. It wasn't enough and yet it was just right. 'Mesmerizing', 'original' and 'vivid' are all words that fit this novel to the tee. When I read the synopsis I was intrigued and then worried. Was I going to be reading another 'I can fix him with my love'-story? Would it be as cliche as I know a lot of novels to be? And yet from the very first page Hoffman cast all of my doubts aside and had me following her trail. In Property Of she manages to show things that would otherwise have enraged me. Women aren't property and shouldn't ever be thought of as such, and yet Hoffman nails it when she describes the feeling of longing to belong, may it be to a group or to one other person. Humans are pack-animals and we crave to be close to others. We also crave excitement, danger, honour and other things that aren't good for us. Hoffman describes many of these things without judgement, without a morality-lesson and thereby allows her reader an insight into a life most of us won't know. It makes excellent food for thought, something every book should strive to be.

Hoffman has an incredible authorial presence that is never too intrusive. She herself doesn't "enter" the narrative but the protagonist often takes a moment out to address the reader. Although this usually breaks up the narrative for me, leading to frustration, here it really helps. Not once do you find out what her name is or where she actually comes from but because the book is so closely entwined with the main character those details would feel unnecessary. You will know her better than you know yourself at the end of the book. I found myself in love when she was, disgusted, terrified when she was and sometimes even angry at her, without ever thinking of putting the book down. Through her use of language, which makes the base and banal lyrical, the novel lures you into this world of gangs and violence, where the concept of honour among thieves still seem to exist and yet reality never fails to intervene, and makes you want to be a part of it. Will I be joining a gang tomorrow? No, Property Of has definitely convinced me it's not my kind of place, but that doesn't mean that the images drawn by Hoffman aren't enticing and spectacular. In many ways, Hoffman has done exactly what I wish all books did. She has taken me on a journey, shown me places I would otherwise never have seen, all from my own room.

This novel is one that exists almost solely for itself. It sounds very abstract or pretentious maybe, but Property Of feels like a book that wasn't written to top the best-seller lists and bring in money, but to allow the author to stretch her abilities to the brink and over it. Originally published in 1977, it is was released as e-book in September of this year and although this may be me growing sentimental over a time in which I never lived, Property Of smacks of a time when "literature" was a lot freer, less constrained by the need to make profit or to fit in with a trend. Being a debut novel, it is naturally also meant to showcase Hoffman's abilities at their best but nothing in this book feels manufactured or fake. She writes matter-of-factly about violence, love, drugs and many more things

I don't hand out 5 Universes quickly because I keep them for books that really resonate with me or touch something that other books don't. Property Of is that kind of book. Hoffman creates a story that is addictive, that you don't want to let go. The thought of picking up another book straight after this one was out of the question. I recommend this not only to Hoffman fans but also to readers looking for a book that will suck you in and not let go.
Posted by Juli Rahel at 10/21/2014 10:01:00 am