Review: 'Once Upon A Time: A Short History of Fairy Tale' by Marina Warner 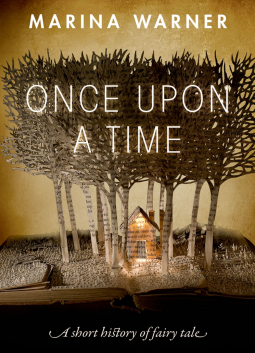 A few weeks ago, I reviewed Children Into Swans, a book by Jan Beveridge in which he explored many of the roots and shared traditions of Northern-European folklore and legends. My main criticism of the book was that I felt that its limitations to Northern-Europe meant a lot of valuable insights were lost. Warner here writes a similar book for fairy tales but also includes Southern European, Asian and Russian examples.


From wicked queens, beautiful princesses, elves, monsters, and goblins to giants, glass slippers, poisoned apples, magic keys, and mirrors, the characters and images of fairy tales have cast a spell over readers and audiences, both adults and children, for centuries. These fantastic stories have travelled across cultural borders, and been passed down from generation to generation, ever-changing, renewed with each re-telling. Few forms of literature have greater power to enchant us and rekindle our imagination than a fairy tale.

But what is a fairy tale? Where do they come from and what do they mean? What do they try and communicate to us about morality, sexuality, and society? The range of fairy tales stretches across great distances and time; their history is entangled with folklore and myth, and their inspiration draws on ideas about nature and the supernatural, imagination and fantasy, psychoanalysis, and feminism.

Marina Warner has loved fairy tales over her long writing career, and she explores here a multitude of tales through the ages, their different manifestations on the page, the stage, and the screen. From the phenomenal rise of Victorian and Edwardian literature to contemporary children's stories, Warner unfolds a glittering array of examples, from classics such as Red Riding Hood, Cinderella, and The Sleeping Beauty, the Grimm Brothers' Hansel and Gretel, and Hans Andersen's The Little Mermaid, to modern-day realizations including Walt Disney's Snow White and gothic interpretations such as Pan's Labyrinth.

In ten succinct chapters, Marina Warner digs into a rich collection of fairy tales in their brilliant and fantastical variations, in order to define a genre and evaluate a literary form that keeps shifting through time and history. She makes a persuasive case for fairy tale as a crucial repository of human understanding and culture.

Fairy tales are, as some of my more frequent readers may know, a favourite of mine. I loved reading fairy tales as a child and the fascination never quite wore off. In many ways I think it also informs my choice of study. However, they are a contentious subject, especially considering the influence they have been given in children's lives. I really enjoyed the way Warner handled the pedagogic aspects of fairy tales and how the traditions within fairy tales and especially fairy tale adaptations work and were changed over time. I think Warner manages to strike a tone that is educative without being pedantic. We all know those books that treat the reader like they're stupid. Everyone knows fairy tales, but only few have a good oversight of how the Grimm's brothers actually crucially changed aspects of them.

For me one of the most interesting things about this book was the amount of attention Warner paid to how different centuries responded differently to fairy tales. Whereas the Victorians tried to soften them up as much as possible to be accessible to children without potentially teaching them something, the trend nowadays in to find the darker sides of fairy tales and explore them. Similarly to how many movies are currently focusing on the dark and the bad, we do the same with fairy tales and find plenty of material. It even bleeds into music, if one wants to think of the interesting choice of 'I've Got No Strings' as the trailer soundtrack for the new Avengers trailer.

I have seen a few reviews online which complain about the fact that Once Upon A Time is not actually a fairy tale but, as the cover says, a short history of fairy tales. I can't really tell what they were expecting, but personally I feel the book did exactly what it said on the cover. By this point I have read quite a lot on fairy tales, folk lore and myth & legends, so many of Warner's ideas weren't ground-breaking to me. However, as an introduction and a general summary of the tradition of fairy tales and the study of fairy tales it serves very well. One of the best things about books like these are often the bibliographies. The authors do a whole mountain of research for their books and then present the reader with succinct summaries with the possibility of branching out.

I definitely recommend this book to people who are interested in reading something about fairy tales. If you're looking for fairy tales themselves, pick up a copy of the Grimm's fairy tales at the library. Warner's writing style is informative without making the reader feel inadequate and Once Upon A Time is bound to wet your appetite for more about fairy tales.
Posted by Juli Rahel at 10/27/2014 12:12:00 am